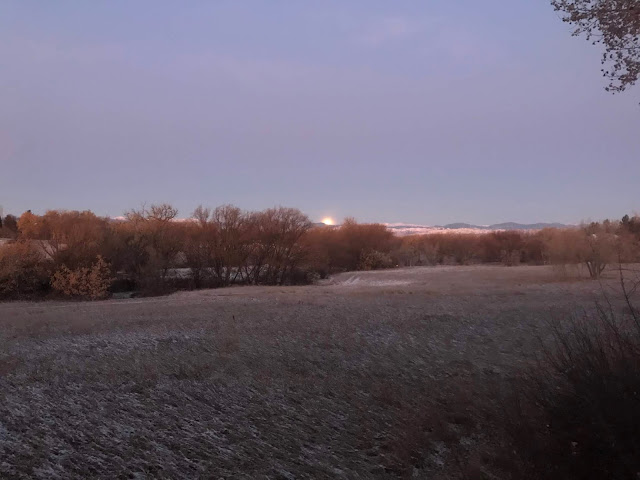 The moon setting can happen at any point in the day, it just so happened that today it set about ten minutes before the sun rose. Something that feels like it should happen more often than it actually does. Watching it go down as the pink rays of dawn were flooding the world in a majestic warmth was pretty awesome. The moon going down behind the mountains was incredible to look at, and (as always) a photo does it no justice. It was just this moment of zen about a mile and a half into my run.

I wasn't done with cool memorable moments on this run once the moon disappeared over the horizon. About twenty minutes later I was right near Littleton High School when a fox suddenly appeared along a knoll that was covered in snow. It was maybe 25 feet away from me, and I just watched its bright reddish orange fur as it contrasted against the white of the snow. It was spectacular. Then, after it had wondered quite far away, I finally thought to take a picture. I was able to get it in the photo, but it was very small looking and far away by then...nothing close to how magical it seemed when it was RIGHT THERE! Still, it was an extremely cool moment, even if I missed capturing it with a camera.

The last thing I need to mention is that I got 9 miles in on this run. Nine! I can't remember the last time I ran that far. It wasn't fast (I looked at my mile splits and didn't run a single mile in under 10 minutes), but I felt good the whole time and put in a great effort. Things are looking good for me hitting 100 miles for the 4th consecutive month, as I'm at 47.77 miles run on November 12th. 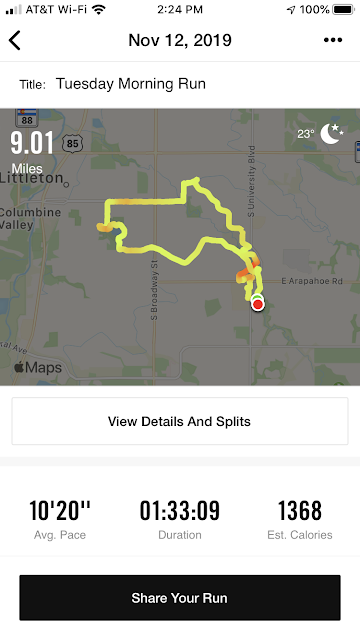