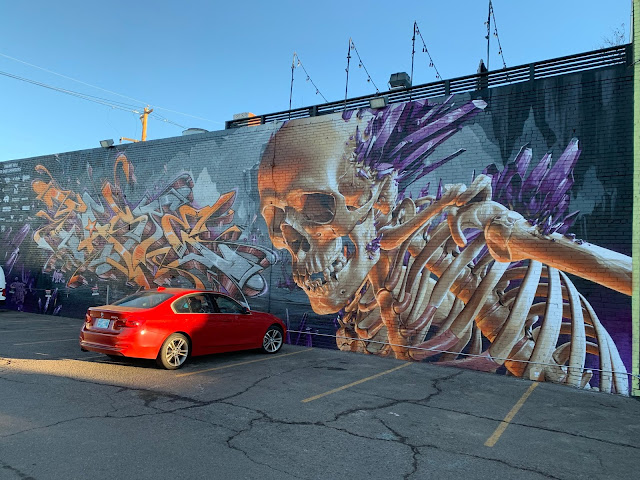 I got through half a song before my earbuds died on me. Wireless earbuds are amazing when they work, but when they don't, it is a bit annoying. So, despite having no music, I pressed on from City Park towards RiNo to check out the walls which are constantly changing into new and awesome murals. I was not disappointed, as I saw so much cool stuff, including this amazing skeleton, which looked very much like it was checking out that BMW closely. I thought it was a longer run going from the park to Larimer Street, so when I arrived back at the park, I was only about four miles into my run, so I decided to get a few more miles by looping through the very fine City Park. It was a lovely morning, even without music.

I was also briefly offended by a guy who clearly didn't mean to offend me. As I was running back towards the park on 35th Ave, a biker headed in the opposite direction yelled encouragingly to me, "Way to go, guy! Get that New Year's run in!"

I'm pretty sure he thought I was engaged in my New Year's resolution of going for a run, and all I wanted to yell back was, "I do this all the time, the fact that it is a new year is immaterial!" However, I just smiled and kept running.