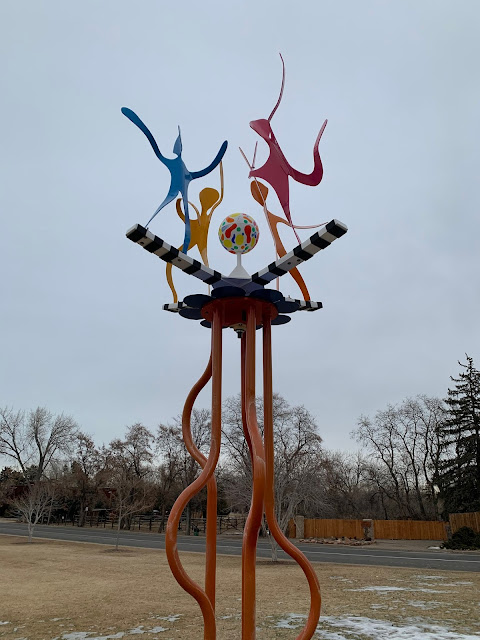 I woke up at 5:09 this morning, and stared at the clock for about 30 seconds. The advanced calculus that I was doing in my head was that if I stayed in bed until my alarm went off, I'd only get another 24 minutes of rest. I was instantly wide awake, and didn't think I'd  fall asleep asleep even a little, and the idea of just lying there for 24 minutes annoyed me, so I got up early. This led to getting out on my run early, which meant I spent a lot more time than usual in the dark of the pre-dawn morning. Being up that early is peaceful, but it's a little weird. Plus, with so much ice on the trails, it made me a little worried that I had a harder time seeing. Still, I managed to do just fine and was able to get in a long run and still arrive back home earlier than usual.

I also saw more geese lying in ice water at Ketring Lake, and have just come to accept that geese are insane.

The photo from today is an art installation at Gallop Park called "Skip to my Lou" it was installed in 2003, and I rather like it.