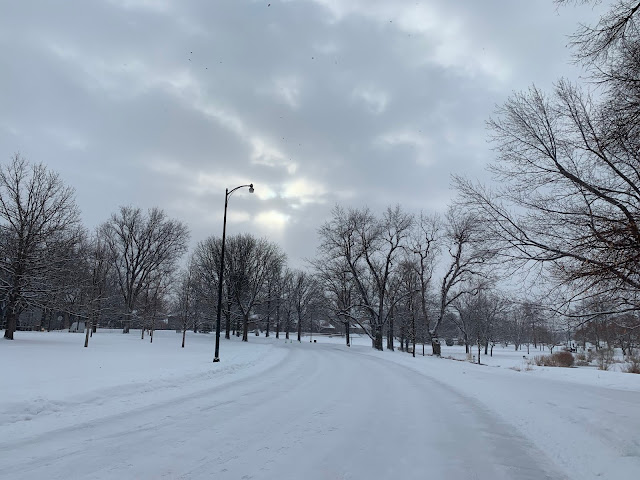 February is the worst month. The wise sage Garfield called it the Monday of months, and he's right. It is cold. The only holiday it really has is Valentines Day, which is one of the worst holidays. It can't even decide how many days it has, and no matter if it's 28 or 29, it's always the weirdest month of the year because everybody else agrees that a month should either be 30 or 31 days, but February just has to be DIFFERENT. And this year, it's the worst because it will never stop snowing! So before we go any further, I should just say that February can kick rocks.

This particular Sunday morning I woke up early to go running, as per usual, and found that once again it was snowing and cold. I had been suffering from a cold for a few days, but Sunday morning it got a lot worse. Between the snow and the sickness, I contemplated not going running, but due to the shortness of February and the few days I have already missed this week, if I'm going to make 100 miles for the month, I can't be taking days off. So reluctantly, I headed up towards Wash Park, hoping I could get in a decent run.

There was a lot of snow and ice everywhere, and when I first got there, I was worried that I'd only be able to run a mile or two before I wore out, but I kept pushing myself and managed three laps around Wash Park for a respectable seven miles. It was a little tough, because there was a lot of ice, and I was worried about slipping, but I managed to stay upright and finish with a respectable distance, so it was all good.

Then I tried to leave.

I parked in my normal spot on Louisiana Street right next to the park. There was a little bit of ice, but I didn't think it was that big a deal. Then I tried to leave. There was a big enough chunk of ice that my car couldn't turn away from the curb. As I tried several times, nothing was happening except moving back and forth and a whole lot of tire spinning. As I got out to take a look, a guy got out of the vehicle behind me and said he was stuck too. We worked on trying to free ourselves, and then we noticed that the SUV in front of us was also stuck. I then went into take charge mode. I told the young woman in front of us that we would both back up to give her the maximum amount of space to maneuver, then I directed her on how she should try and escape our predicament. I theorized that if she tried to back into the street, it might give her a better angle, so I directed her to basically put her front end onto the sidewalk and the back out. That strategy actually worked, and I got her out, then I was able to repeat it with the guy behind me and then I was able to escape. It's not like me to get super bossy and take charge with strangers, but it worked and I felt pretty proud as I drove home.