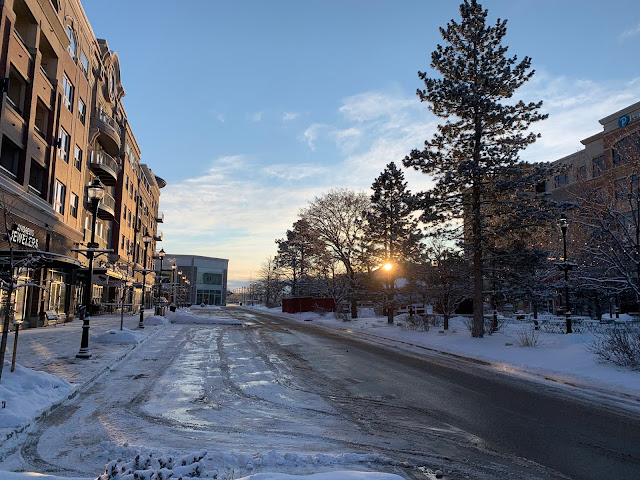 After a day on Monday where it looked like things were going to melt a little bit, it started snowing Monday evening into Tuesday, and the world was covered with snow as I headed out. I knew I wasn't going to go far because there was a lot of snow and ice everywhere, so I headed to Southglenn because I knew it would at least be shoveled.

The times are starting to leave the outdoor shopping mall behind, I'm afraid. A few years ago, there would have been a team of six people out scraping the snow and putting down salt and making the ice disappear. This morning, it was evident that someone had come through and shoveled the snow, but the ice removal and care to make sure that all available sidewalks were perfectly clear is now missing. I also noticed for the first time this morning that the Victoria's Secret that had been a staple for years on one of the corners had closed down within the past week. Looks like the outdoor mall is slowly dying. That makes me sad, but I can't say I'm totally surprised.

Despite the less than perfect conditions, I still was able to run a decent little .4 mile rectangle that was quite obviously the safest and least icy stretch of the mall. I ran around that rectangle a whole bunch of times and ended up with over seven miles again. Someday February will be over, and I'll be able to go on a run on ground that I can actually trust I won't slip on when I take a step, and that will be glorious.