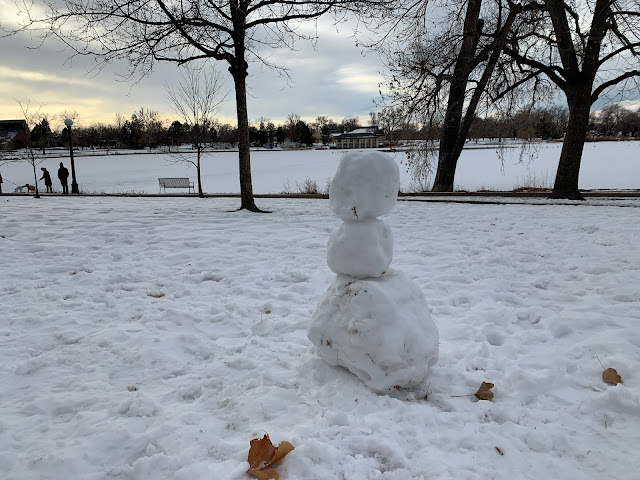 December 20, 2020
7.40 Miles in 1:14:20
Mood: Ugly sweaters galore
Soundtrack: The Avett Brothers "The Third Gleam"
Perspective can be a funny thing. This looks like a normal snowman, but I assure you, it is teeny tiny. Look at the size of the leaves for context. I just got down really close to the ground to take the picture, and it turned out pretty cool looking. I take photos of most snowmen I see, regardless of quality.
Also, there was too much snow on the ground for this run, so I had to run on the paved section of Wash Park, not as good as the outside track, but still nice. I was far from alone, as well, as this particular morning the park was hosting an Ugly Sweater run. It was very odd, as it appeared they were keeping their participants well paced out, so for the entire time I was running, I saw runners of varying speeds also circling the park in small groups. Most running while wearing outrageously ugly sweaters. It was a treat.