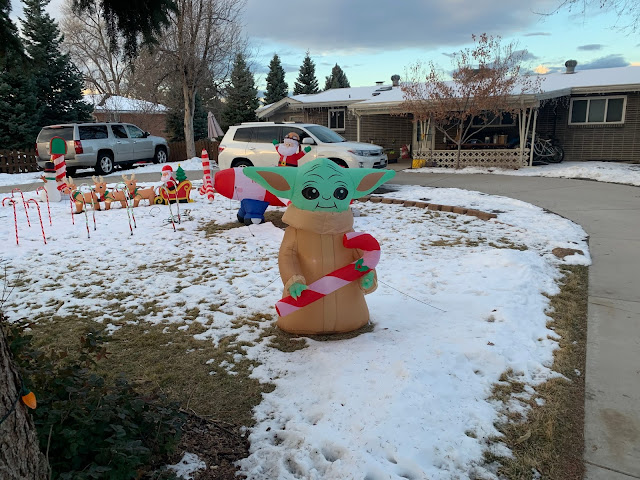 December 18, 2020
7.23 Miles in 1:14:35
Mood: Christmasy Baby Yoda
Soundtrack: Phoebe Bridgers "Punisher"
If you have an inflatable Baby Yoda in your yard, there is a good chance that I will take a picture of it and it will end up on this blog. That's just science. So good work to the people of this house. One week before Christmas and I was in a Christmasy Baby Yoda mood.
There was a lot of snow and ice on the ground for this one, so I stayed mainly on side streets where I could run in the street and avoid large measures of traffic. That allowed me to avoid slipping pretty well, avoid getting hit by cars entirely, and it also allowed me to see a mobile dog washing station washing a large floppy haired white dog in his own doggy driveway. The dog was very cute and also sitting completely still, and it appeared that he was resigned to his fate to become a clean dog. I felt a little bad for him, because he was soaking wet and it was really cold, so the walk from the dog cleaning trailer back into his home was going to be really really chilly. Still, I was glad I was able to see such a thing, as I had never seen one of those mobile dog wash businesses in operation. It felt like seeing a unicorn in person.