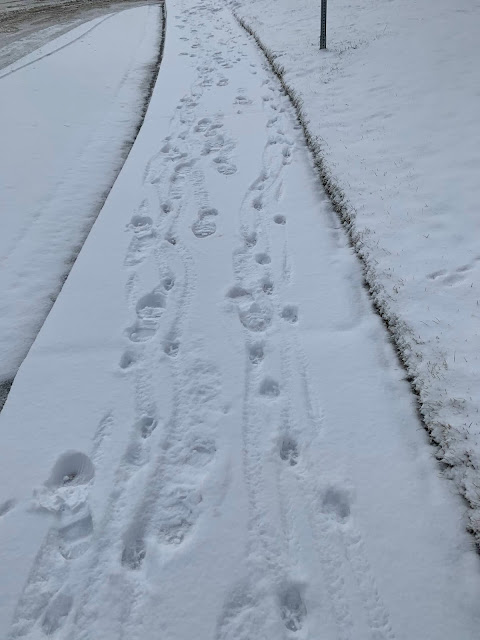 December 29, 2020
7.26 Miles in 1:18:08
Mood:  Here comes the sun!
Soundtrack: The Beatles "Abbey Road"
I awoke to find that a few inches of white stuff had fallen while I slept. This left the sidewalks and streets in the condition seen above...not ideal. I only needed six more miles to put the finishing touches on my 17th consecutive 100 mile month, and today was the day I had scheduled to make that happen, so I did what I so often do in these situations...head to Southglenn.
Southglenn was a little slippery, but so much less so than anywhere else I would have ventured, so I did my loops and got my miles and called it a day. The snow made me realize one thing, and that was that the Beatles song "Here Comes The Sun" was probably written in winter, as when the snow comes, the ice is slowly melting. I got to see that phenomenon in action, as when I began, the ice was everywhere, but the sun came out and the ice indeed did slowly melt. It's just as nice to see in person as it is to hear in song, and when the two come together, it's magic!