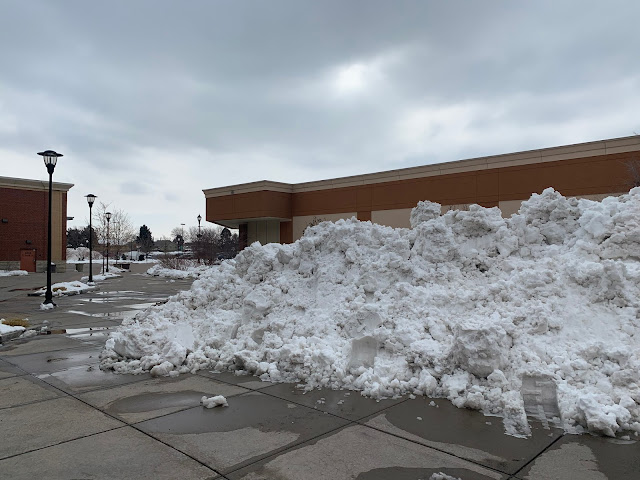 March 16, 2021
7.24 Miles in 1:14:01
Mood: Blessed be the snowclearers, for they shall be called sons of God.
Soundtrack: Portugal. The Man "Woodstock"
I skipped out on running on Monday because over two feet of snow had fallen the day before, and there was snow piled up everywhere which made it had to try and walk, much less run. I also didn't get up early to run on Tuesday, but when I looked outside, it seemed like there might be a chance that the snow clearing folk of the world had done enough of their wonderful work to make running possible. I decided to take a long lunch and try my luck at Southglenn for the second straight run. Turns out that, at least at Southglenn, things were perfectly cleared for a run. I was running on totally dry pavement. It was a miracle. The photo above is where they must have shoved almost all of the snow that fell of Southglenn, as it was a massive pile. That stack of snow was at least nine feet tall if not higher. It may not melt until July.