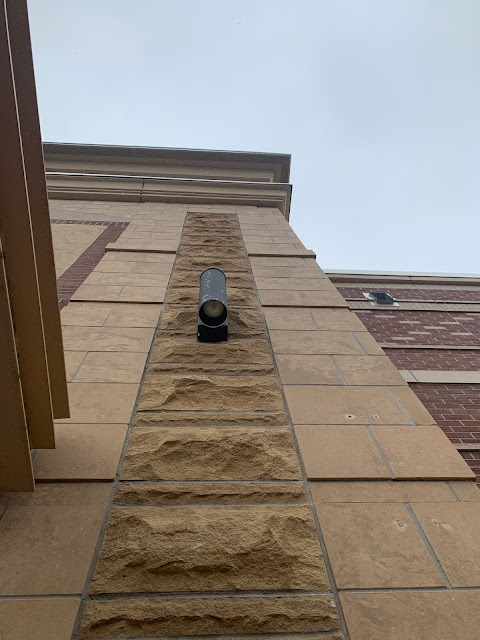 March 13, 2021
7.16 Miles in 1:18:44
Mood: I don't like snow, and am barely capable of operating my own phone.
Soundtrack: Whatever sounds rain and snow make.
The weather forecasters were predicting a massive snowstorm. (Which eventually started Saturday night and left us with the fourth largest snowfall in recorded Denver history.) Snow was going to start falling on Saturday, but it was pretty meager, and I decided I needed to get some miles in before we were buried in feet of the white stuff.
Today's photo is of a cool textured wall on the side of one of the Southglenn buildings and also the gray skies out of which a nasty mix of cold rain and a few snowflakes were falling. It wasn't super cold, but I did get rather wet.
I didn't want to be far from home in case the snow hit fast and hard, so I just ran around in circles at Southglenn waiting for a massive snow that never fell. After a little over four and a half miles, Jen called and asked me to go to the grocery store to buy a few things, and she hung up on me, but I pressed the button to end my run on the Nike Running App thinking somehow that I was hanging up on her. Snow freezes my brain, I guess. So anyway, that is why there are two maps below, as this run got divided into two sections...the first being me running at Southglenn, the second being me running to the grocery store and then back home. (Also, a few runs ago the map function didn't work, but apparently that was a one off thing instead of a change Nike implemented. And I am thankful for that!)