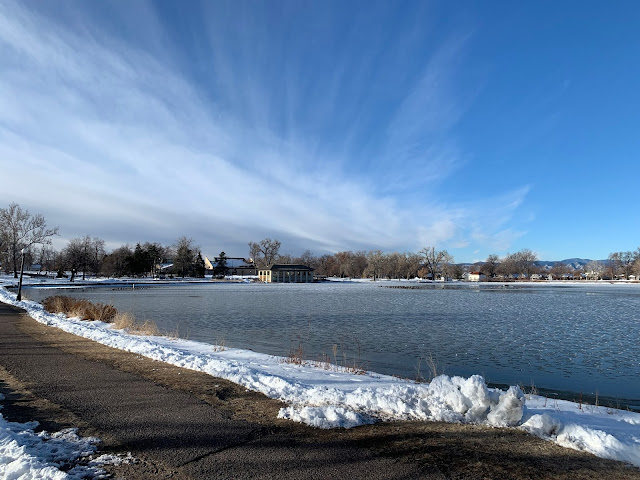 February 28, 2021
7.06 Miles in 1:10:02
Mood: Just me and my brother, feeling good!
Soundtrack: Passenger "All The Little Lights"
This was sort of a run with my brother. He hasn't been running much at all in the past year, so he told me that I'd probably be leaving him in the dust at Wash Park. He then took off about 45 seconds before I was ready, so I started by trying to chase him down. I felt REALLY good while chasing him, and that led me to go three and a half miles without stopping even once. Then I took a break or two, but finished the seven miles feeling really good. It was the total opposite of Friday's run which felt terrible, this one was amazing, and I even did it averaging under 10 minutes a mile.
Not only did it feel good for me, my brother mentioned that it was really encouraging for him too, so we drove back to my house both feeling quite good about the world on a beautiful Sunday morning. It wasn't super chilly on this run, but the lake is still quite frozen.