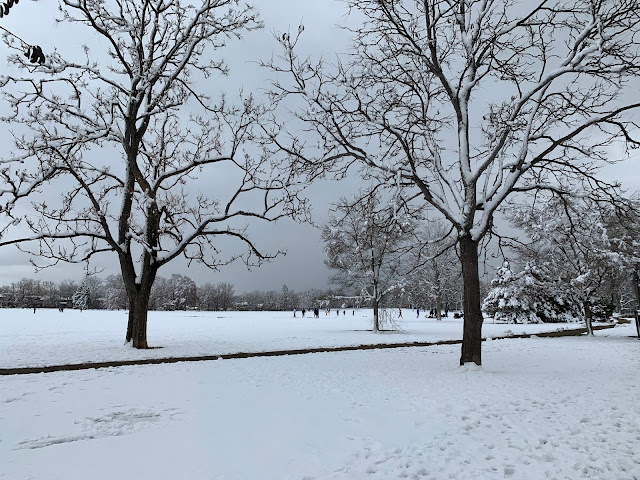 April 17, 2021
8.19 Miles in 1:24:34
Mood: Behold the power of juice!
Soundtrack: The Mountain Goats "In League With Dragons"
It's been a minute since I ran on back to back days, but I wanted to get my mileage back on track to get my 100 mile month goal for April, so I went back out less than 24 hours after my last run. It was an odd Saturday morning as I ended up doing four laps around the paved portions of Wash Park, and the weather varied greatly from heavily snowing to bright and sunny.
Once again, I had a low blood sugar episode, but I was able to handle it with a little help from a promotional juice guy! I ran past him the first time I saw him, he was holding a handwritten sign that said, "Free Juice!" I thought it said, "Free Speech" and I thought that was weird. Then, I did a double take and realized it said free juice. By the time I ran around to the other side of the park, a low blood sugar had hit me, and I was beginning to feel the awful shakes and lack of energy that come with it. I remember the juice guy, so I walked over to the other side of the park where I had seen him, and he was still there. I talked with him for a few minutes, and he was very friendly and he suggested this juice with kale in it that he said would do the trick. It didn't sound good, and it was green, but I needed the sugar so I took it. I was so wrong. It was DELICIOUS. I quickly finished it while walking away and it was so good, I went back to ask him if I could try another flavor because it was just so good. He nicely gave me another one, and after downing two juices, I felt much better. I had one more lap of the park to accomplish, and I felt great again. When I passed him by the last time, he pointed at me in a friendly manner, and I did the same back. I didn't stop, but he grabbed another juice and headed over to me and offered it up to me. I wasn't going to say no, so I snagged it and ran the final half lap back to my car with a juice in my hoodie pocket. God bless that guy!