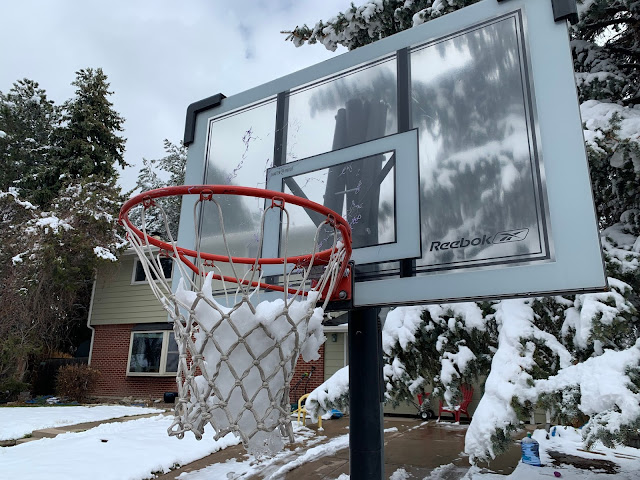 April 16, 2021
7.33 Miles in 1:17:19
Mood: Running in the middle of my work day.
Soundtrack: Frightened Rabbit "The Midnight Organ Fight"
This was a weird one, because I skipped running in the morning due to falling snow, but then I just took a really long lunch hour (Over 2 hours) so I could get a run in during the middle of the day. Worked out, okay! The only real problem was a recurring low blood sugar that had me stop at two different grocery stores during the span of the run to purchase food to combat the problem. Low blood sugars are the worst when I'm out on a run. I go from feeling great, to dragging so hard, and it happens so quickly. Thankfully I was able to fight through it and get a decent amount of mileage in despite the problem.
Today's photo was something that amused me. I passed several basketball hoops on my run, and they all had gathered snow inside of them. I don't think this usually happens, but the snow was so wet and sticky that they all had it. It amused me, so I made a photo of one today's photo.