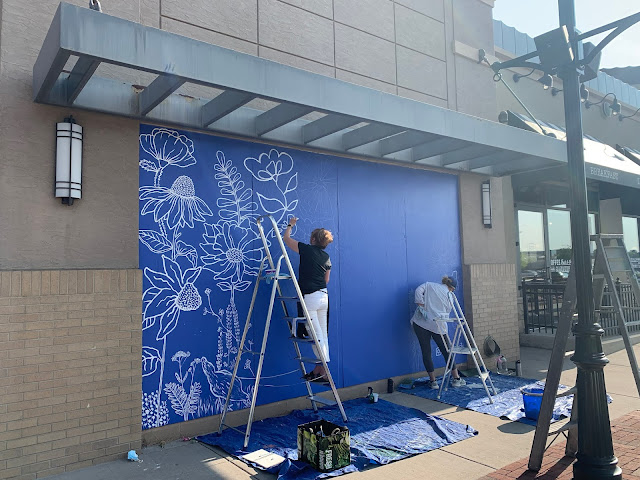 July 21, 2021
7.42 Miles in 1:18:39
Mood: Southglenn was hopping for a change.
Soundtrack: Lupe Fiasco "Lasers" and "Food & Liquor" and "The Cool"
For as much as I run around Southglenn, I often have a very hard time finding something interesting to take a picture of for that run. That was not an issue on this run, as for once THINGS WERE HAPPENING!
The first thing that I thought was going to be the picture of the day had to do with a crew of about six guys who were manning what I would classify as a mulch cannon. One guy had a giant tube around his shoulders that shot out mulch at a rate that could only be called way too fast. It was shooting the mulch out with a thrust that would have shot it one hundred feet into the air if it was pointed up rather than straight down to the ground. The impact of the mulch hitting the planters on the ground was causing huge clouds of dust to arise, and the other five guys were manning leaf blowers to corral all the mulch that got loose because if they didn't do that, it would have left a colossal mess. It was very interesting to watch, and it would have been the photo for the day....
BUT!
I also came across these ladies nearer to the end of my run, and they were in the process of creating a new art installation on the wall of the mall. This is the blue flower mural that is now finished as it was being painted, and I rather like it!
Cool morning with so much happening!