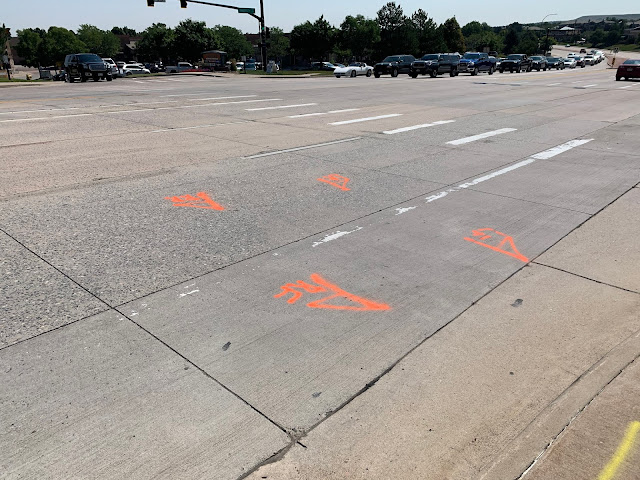 August 14, 2021
7.84 Miles in 1:24:48
Mood: Still in shock a bit
Soundtrack: Counting Crows "Recovering the Satellites"
I had a rough Friday the 13th. I was driving through Highlands Ranch, and while I was looking to see if the left lane was clear to change lanes I neglected to look to see that the light was red and as a result there was a most unfortunate and violent collision in which my car was smashed up quite extensively. On this Saturday morning less than 24 hours later, I decided to visit the scene and take a picture of where my car had been, a site that was well marked by police officers so that I could take a picture of the exact spot where my Carolla came to a stop. Those four marks were where I sat after the accident, and that line of cars waiting for the light to change is where I was driving, and that lone SUV is where the car was coming from that hit me. Whiz! Bang! Smash! It all sucks.
Fortunately, everyone is okay, and cars can be replaced. Still, it was a little surreal to visit the site where a matter of 18 hours earlier I was standing on the side of the road a bit shaken up for an hour as I waited for the traffic cops to clear the scene. Car accidents. Not a fan, do not recommend.