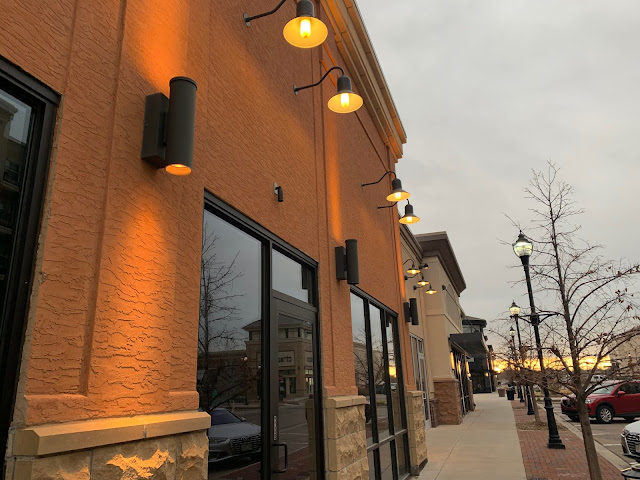 April 14, 2021
7.41 Miles in 1:21:58
Mood: Another morning running in circles
Soundtrack: Weezer "OK Human" and AJR "OK ORCHESTRA"
I skipped my Monday run to get my second shot of the Pfizer vaccine, so it had felt like forever since my Saturday run as I started out on a Wednesday morning. The forecast was for rain and snow all day, so I decided to stay close to home in case in became uncomfortable...so you guessed it...Circles around Southglenn! I'm clearly running out of things to photograph at Southglenn, but I'm amazed at how many different textures there are on the building there. This one in particular is much different than the rest of the place, and there isn't even a business there. Also, I liked the cool lamps that were giving off warm light. Also, I listened to two different albums that begin with "OK" and it is my opinion that the AJR one is better, but the Weezer one has the best song. (That best song being, "All My Favorite Songs")

Posted by Craig Dodge at 4:49 PM No comments: 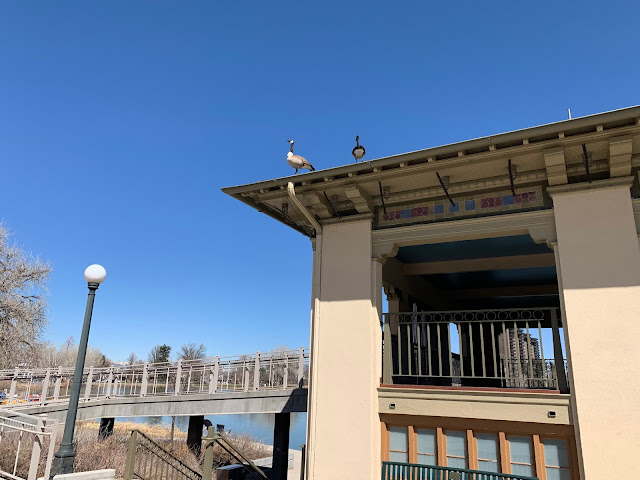 April 10, 2021
8.51 Miles in 1:27:24
Mood: New music and Geese doing weird things
Soundtrack: AJR "Okay Orchestra"
AJR has a new album! I love runs that allow me to listen to a brand new album from a band I like, so already this one started out on the right foot. I'm liking it, AJR is definitely staying themselves on it, any of these songs would have been right at home on their other albums. Made for an enjoyable run.
Also, I see Geese so often that they either are rarely anything more than a nuisance or a non-entity to me; However, when I saw a few on the roof of the Wash Park boathouse, I have to say, that surprised me a little. I don't usually see them hanging out on roofs. It amused me, so of course I had to take a photo.

Posted by Craig Dodge at 1:41 PM No comments: 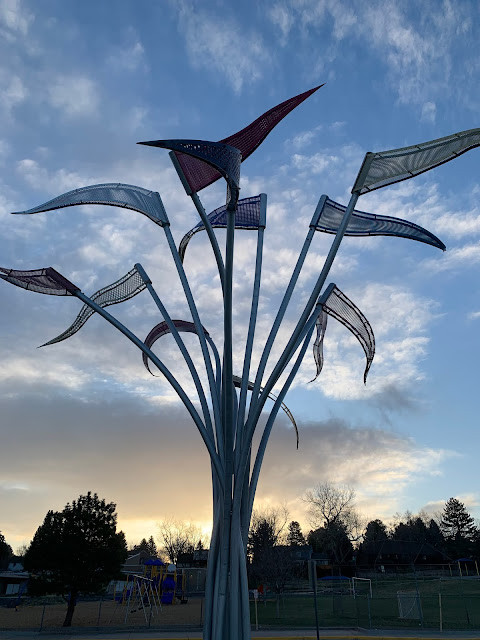 April 8, 2021
7.28 Miles in 1:18:10
Mood: Cool art and even a new trail! Yay!
Soundtrack: Haley Heynderickx "I Need to Start a Garden" and Katie Pruitt "Expectations"
I remember the name of this art installation, but not the artist. That's on me, but I do like it. It's called "Pennant Whimsy" which is a good name for a cool little bit of art that has a pennant for every elementary school in Littleton Public Schools. (At least until some of them close and combine, which is scheduled in the next few years.) This particular bit of art is located in Cherry Knolls Park pretty close to the beginning of my run. Since it's close to home, I also went ahead and nominated it to become a Pokestop, because that would be cool. I love how the clouds are so textured in the background of this picture. It was a nice start to what would be a pretty nice run through parts of Centennial and Greenwood Village and by some enormous houses that must cost multiple millions of dollars. Also, I found a new small trail that I had never seen before...something that happens next to never these days now that I have run all over a five mile radius from my house...you can always see something new if you try hard enough.

Posted by Craig Dodge at 1:36 PM No comments: 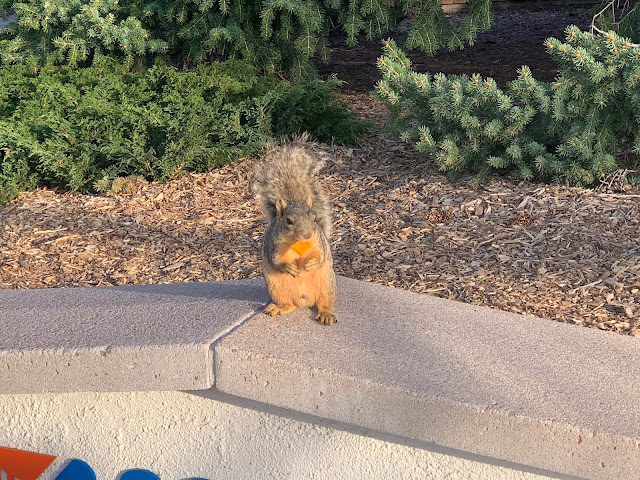 April 6, 2021
7.28 Miles in 1:16:47
Mood: The squirrel has moxy.
Soundtrack: Waxahatchee "Saint Cloud" and the Locked On: Nuggets Podcast
This squirrel was just eating a cracker and hanging out. He did not care that I was being a squirrel paparazzi, not one bit. He just kept eating his cracker. You've never seen such a poised squirrel. He was the hero of this run, as it was by far the most interesting thing I saw on this beautiful April morning.

Posted by Craig Dodge at 7:02 PM No comments: 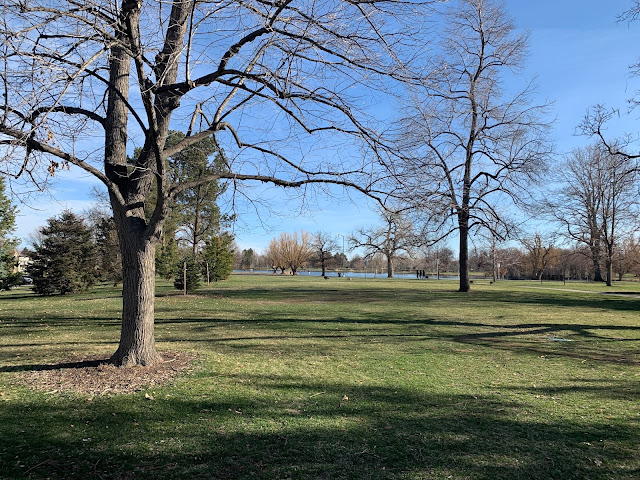 April 4, 2021
7.21 Miles in 1:13:27
Mood: Huzzah for Green!
Soundtrack: The Long Winters "Putting The Days To Bed"
It has just started getting warm, but spring is definitely springing. This is the greenest I've seen Wash Park in 2021, and it seems like it went instantly from brown to green. Also, I love this, as it means that winter is dying, and I love it when winter dies. Long live green!

Posted by Craig Dodge at 6:58 PM No comments: 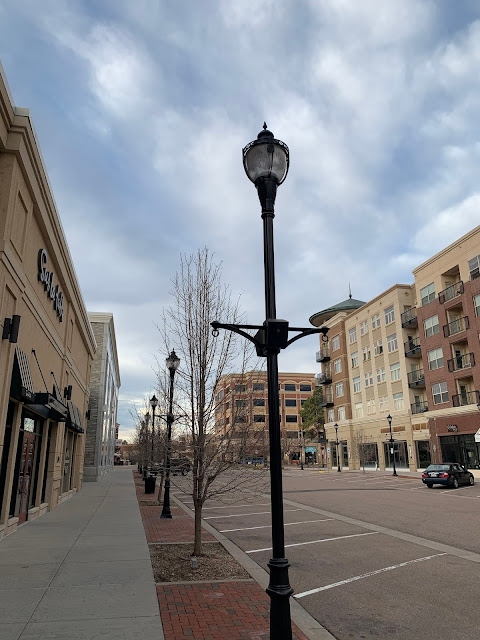 April 2, 2021
7.60 Miles in 1:21:54
Mood: Appreciating Southglenn and I run in circles and count the laps.
Soundtrack: Barenaked Ladies "Everything to Everyone"
Another morning spent at Southglenn running in circles. I counted the laps this time, and I did 11 rotations around the complex. I am deeply thankful for this place which is both a good place to run (especially on snowy days) and a good place to refill your Pokemon Go items...sometimes at the same time.

Posted by Craig Dodge at 6:54 PM No comments: 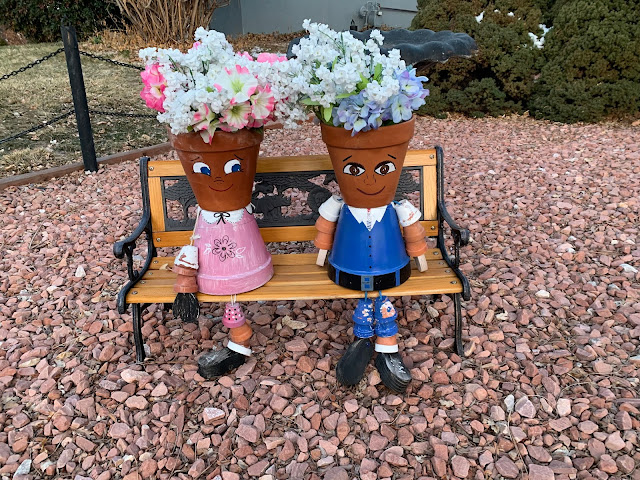 March 31, 2021
7.38 Miles in 1:17:52
Mood: Enjoying the yard art.
Soundtrack: The Avett Brothers "Closer Than Together"
Gotta admit, I found these gendered flower pots pretty cute...even if the girl pot only has one leg and one arm. It's a good thing that there are 31 days in March, because I needed all of them to get myself to 100 miles for the month, but I did it, and now I've done it 20 months in a row. Still a ways from my record of 51, but the number keeps going up, so this is good.

Posted by Craig Dodge at 3:26 PM No comments: 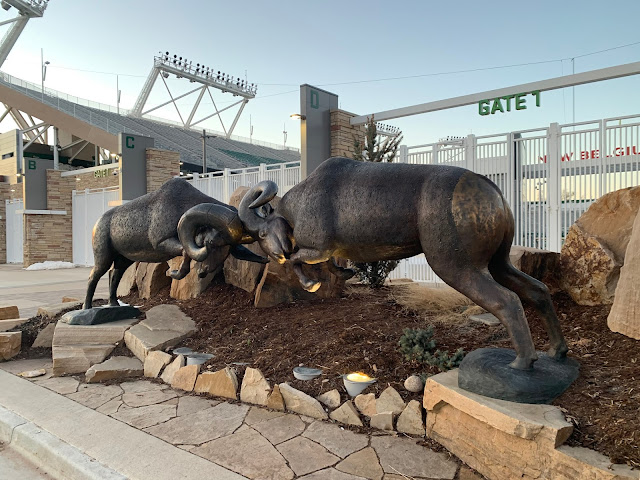 March 28, 2021
7.94 Miles in 1:23:47
Mood: Happily running in a new and interesting place.
Soundtrack: Dispatch "America, Location 12"
Our family decided to take a short little overnight trip to Northern Colorado for the weekend, and I got up really early so I could get a run in at a new place. I spent a lot of time in Fort Collins as a kid, but had never run here before, so I was excited to check it out by foot. The night before I picked up a pizza at a spot I would describe a place that the cool college kids hung out and ate pizza. When I walked in, I immediately felt a billion years old, I was the oldest person there by orders of magnitude. It was almost as if my bones were turning to dust like the Nazis that open the lid of the Ark of the Covenant in Raiders of the Lost Ark.
I bring up my pizza experience to hammer home yet another thing that separated me from the youth of Colorado State...college kids do not wake up at 6AM on Sundays. I felt like I had the entire town pretty much to myself so I took advantage and checked out a large swath of a charming little college campus. Today's photo comes from their football stadium, which has a cool statue of two Rams locking horns, which is a cool image, but perhaps a bad symbol of team unity. Based on the success of Rams football...I might be correct. The football stadium is quaint. I liked it, but it sure seemed small. I would love to go to a game sometime, perhaps I will someday.
I also ran through downtown Fort Collins, which has some cool art and some neat old buildings. There is a lot of charm in the whole town. I finished up running on the Poudre Trail which runs right along the Cache de Poudre River. It's always fun to run in a new place, but especially fun when you get so many diverse and interesting experiences as you run. I give this run five stars!

Posted by Craig Dodge at 7:25 PM No comments: 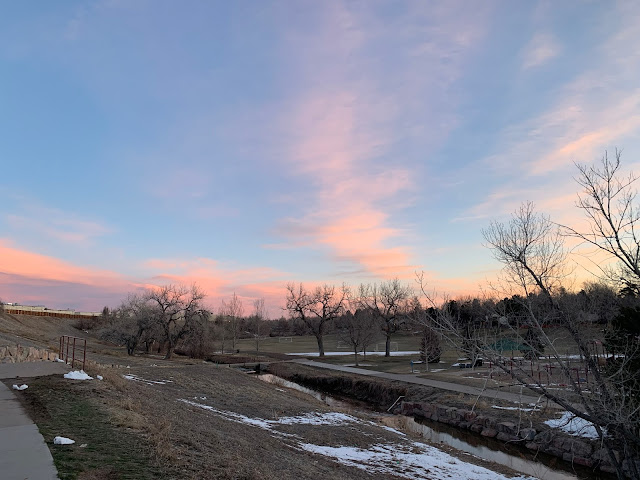 March 25, 2021
8.04 Miles in 1:25:14
Mood: Pink clouds and a good run
Soundtrack: Weezer "OK Human"
It felt like it had been awhile since I did a lot of Highline miles, and I was in a mood to get some. I took a photo right at the beginning of the run of some pink clouds, and then it was pretty much all business. I decided to make it an eight mile run to reduce how far I'd have to run on my next few runs to hit 100 miles for the month, and they were a solid eight miles. Felt good.

Posted by Craig Dodge at 7:00 PM No comments: 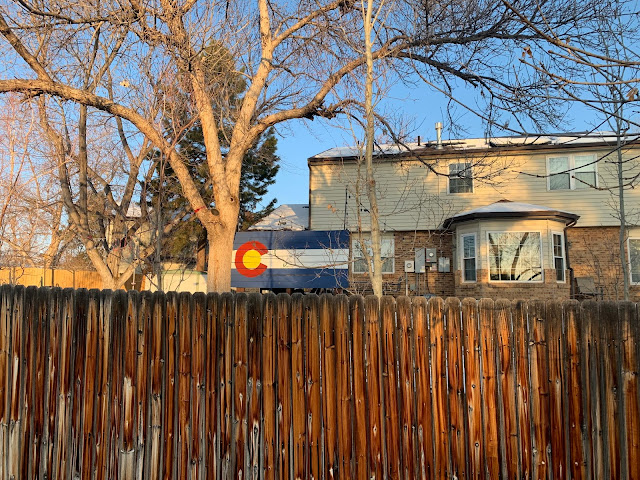 March 23, 2021
7.67 Miles in 1:22:55
Mood: Enjoying the light
Soundtrack: Dispatch "America, Location 12"
There was a tiny bit of concern in me that I'd not feel well enough after getting a vaccine shot to be able to get my Tuesday morning run in, but apart from a sore arm, I felt pretty good and ready to go when my alarm went off. My pace wasn't anything special, but I managed to get in a respectable number of miles and also see a big portion of fence that someone turned into a Colorado flag in their backyard, as seen above. Not sure why they did it, but as always with weird things people do to their houses, I approve. Also, you can see from the photo how warm and rich the light from the morning sun was, which felt good and made the world look cool.

Posted by Craig Dodge at 6:50 PM No comments: