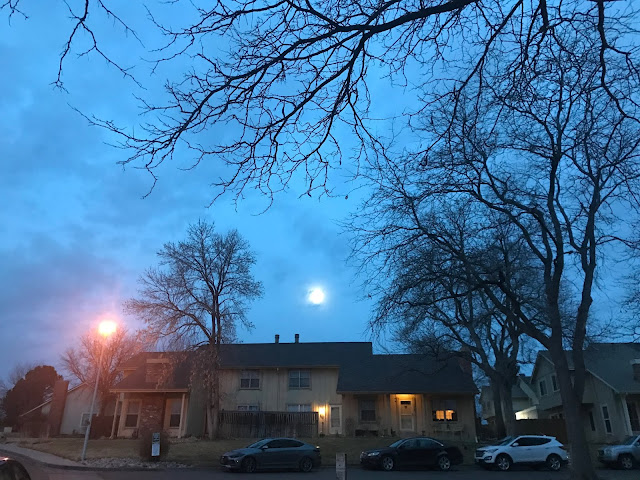 The moon poking through the clouds this morning as I left the house was really awesome. It came through pretty well in the picture, but as always, nothing compares to being there.

I got tantalizingly close to reaching six miles for the first time in a very long time, but towards the end of my run my blood sugar dropped, and I wasn't able to sustain a run for very long and I fell just short. Still, this one was pretty good and although I'm still so horrifically slow, I feel like I'm very very slowly getting better. 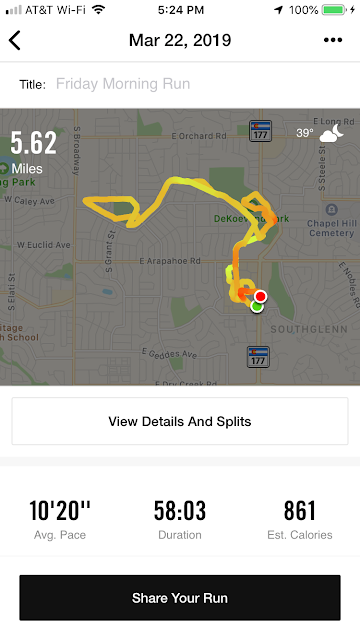 Posted by Craig Dodge at 4:45 PM No comments: 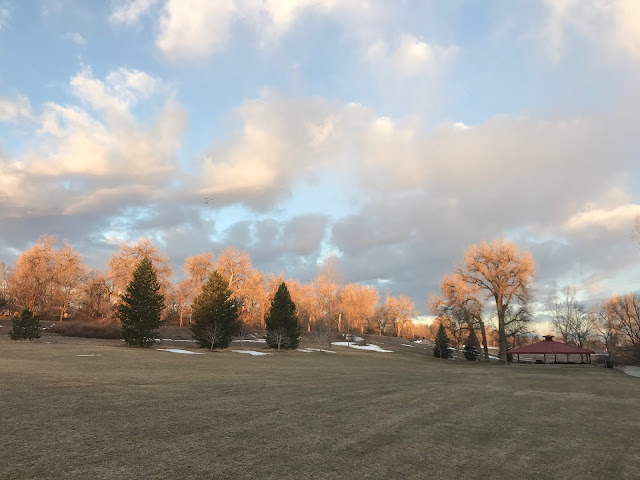 I am not sure why, but I love this picture. It was the final day of winter, and the clouds were just so big and fluffy, plus the sun is lighting up the trees in the background. I love it. 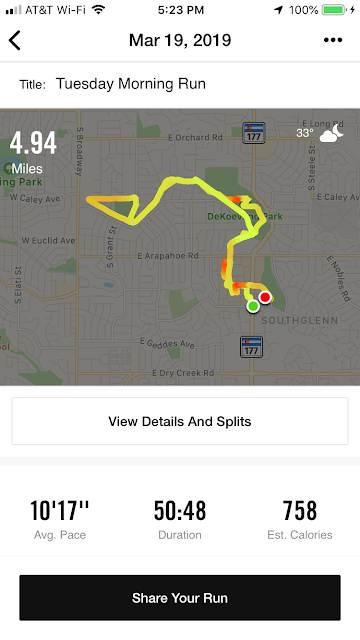 Posted by Craig Dodge at 4:43 PM No comments: 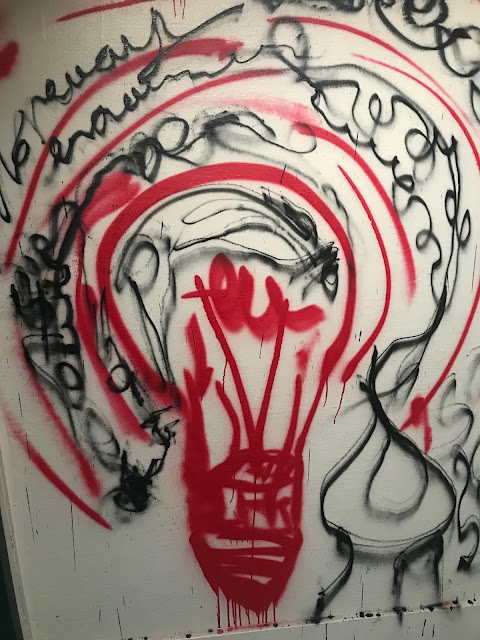 I find it hilarious that I unintentionally listened to U2 on Saint Patrick's Day. That is quite a coincidence if you do it by accident.

As for this run, it was a fine day at Wash Park, and I felt fine as I ran, but the thing I will always remember about it the most was the old guy who held open the bathroom door for me and as he did so said, "You won't believe what they did in there. Bastard kids!" This dude was very angry. The bathroom did smell like spray paint and was a huge mess, but at least the graffiti was kinda artistic. It had the light bulb as seen above, and it also had three skulls. One with x's over the eyes that said "See", one with an arrow and x's going through the ears that said "Hear" and one with x's over the mouth that said "Speak". I'm not sure what the point is, but at least it had a theme. 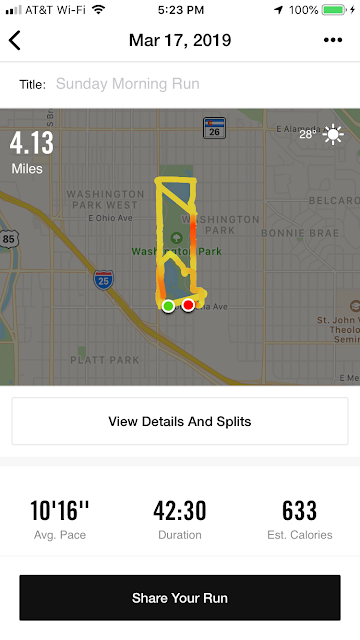 Posted by Craig Dodge at 4:37 PM No comments: 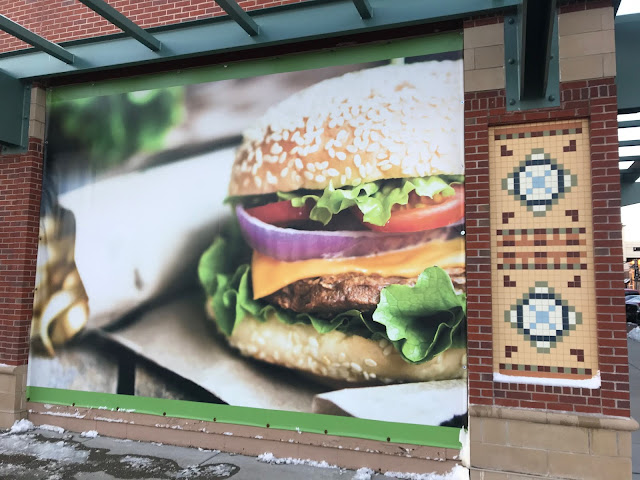 That is a very large picture of a hamburger. It's a little hard to tell from this photo, but just know that this hamburger is definitely larger than I am.

This run started out okay...I was confining myself to Southglenn because we had an intense snow storm a couple of days ago. They called it a bomb cyclone. This sounds like a fake term, and you know that everyone thought that because every time the news discussed it, they assured us it was a scientific term. What it meant to us in real terms is a whole lot of ice and snow, and I was sent home halfway through the day on Wednesday. The remaining snow and ice made the normal streets kind of unrunnable, but Southglenn is always clear because of commerce and the need for clear sidewalks.

The biggest bummer of this run is that it was cut short by a call from my wife who let me know that one of our vehicles had a flat tire. This is an unfun way to end a run that had felt pretty good. I was going to make it to five miles easy...maybe even six. Oh well, next time! 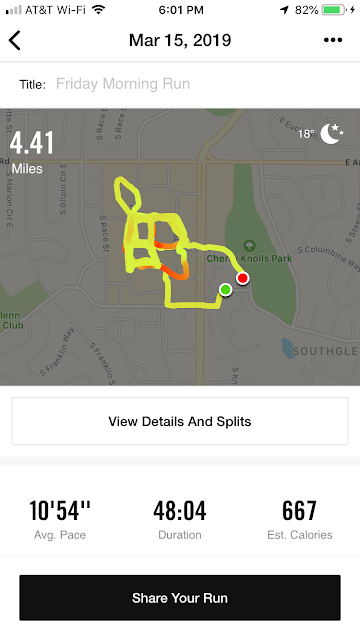 Posted by Craig Dodge at 5:07 PM No comments: 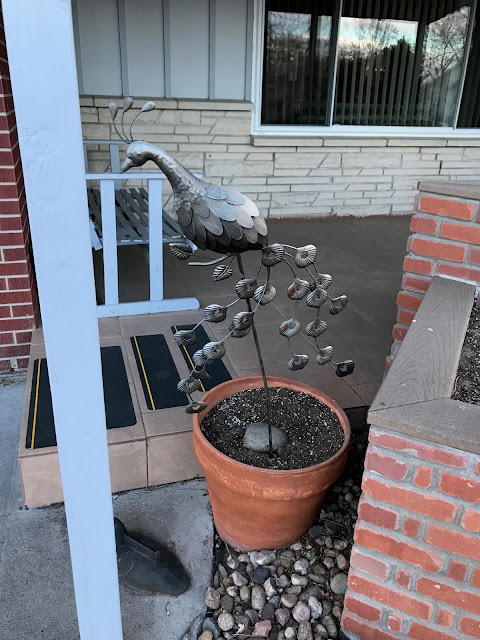 I was still pretty tired from the time change (we "sprung forward" over the weekend), but with the forecast showing a big snowstorm headed my way, I figured I better get up and out while the weather was still decent. Felt good about getting five miles in, although my photo today was a little lackluster...just a potted metallic peacock, which is more fun to type than it is to look at. 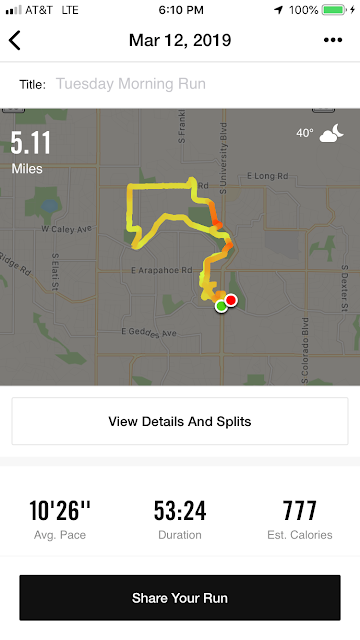 Posted by Craig Dodge at 4:24 PM No comments: 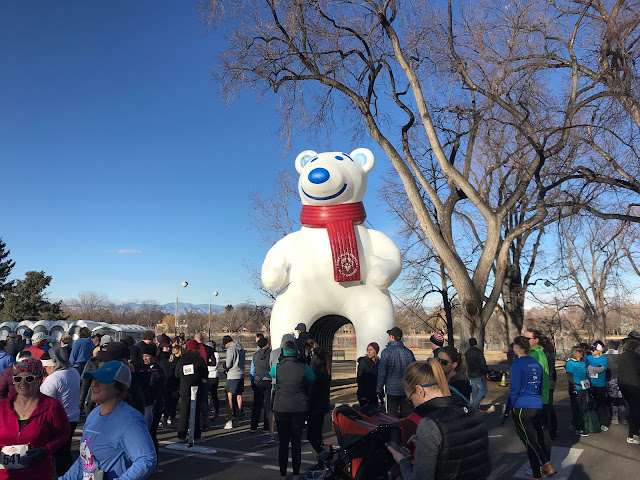 There was a giant inflatable polar bear in Wash Park. That was by far the most memorable thing about this run, other than the fact that I apparently forgot to end my run on my Nike Plus app, and while I didn't get any extra mileage from driving home, it did make my map look ridiculous. 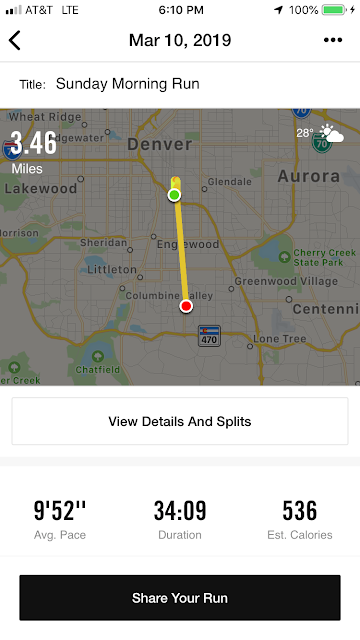 Posted by Craig Dodge at 4:20 PM No comments: 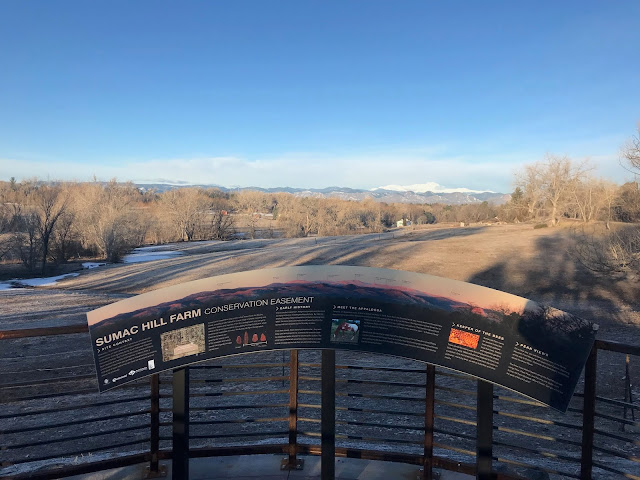 I actually got out and ran on the Highline Canal! The ground was hard, but the snow had melted, and it felt pretty amazing to be out on my favorite trail again. I haven't been able to do that much lately. Plus it was an amazing spring day. The kind that gives me hope that winter won't last forever, and that pink trees are just around the corner. 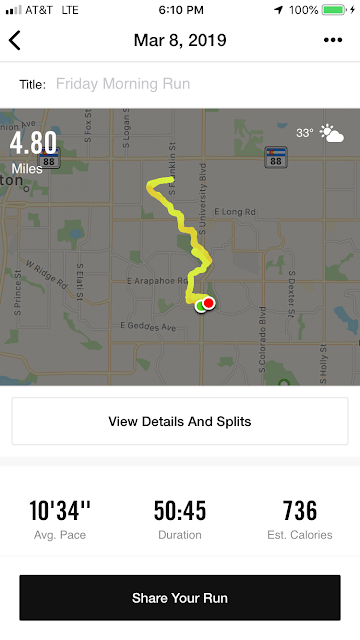 Posted by Craig Dodge at 4:18 PM No comments: 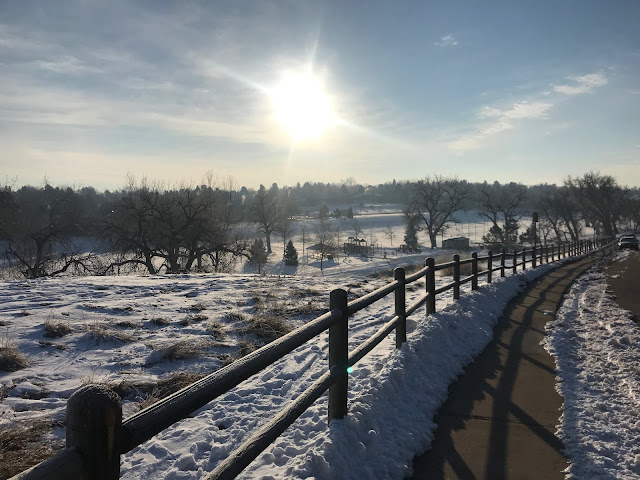 I didn't have much time for this run, because I needed to be back to take my daughter to school, so that inspired me to get out and running quickly. For the second run in a row, I felt like I had more in me, but didn't have time to actually get those miles run. Still, the short amount of time I had felt good, despite the fact that it was 7 degrees outside when I started. I was bundled up, and barely felt the cold.

Also, I swear I'm not going to make every photo from now on a picture of Knolls Park from above, but for the third straight time (non-Wash Park division) this was definitely the best photo I took. 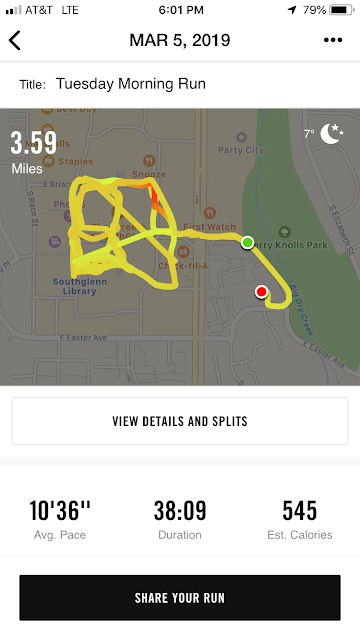 Posted by Craig Dodge at 3:49 PM No comments: 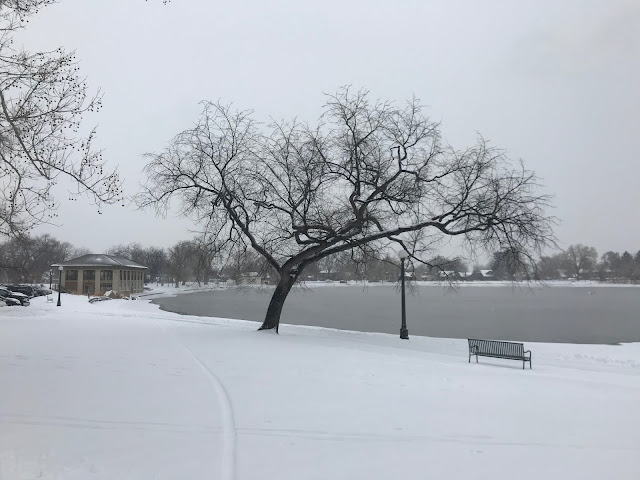 I woke up early Sunday morning considering running, but it had snowed all night and the temperature at the time I got up was a balmy 5 degrees. I decided to head back to bed and then go for a run that afternoon. It was slightly warmer when I did go, but it was also snowing pretty solidly. You can't see the snow in this picture, but believe me, it was snowing. At one point it was coming down so hard and I passed another park jogger and thought to myself, "What are we doing?"

It was one of those days at Wash Park where there were about as many cross country skiers using the park as joggers. The thing is, once you get used to it, it actually felt really good. There was ice on the ground, but it wasn't overly slick, and the chill keeps you moving. I quit after two laps because my phone's battery was almost completely drained and because I felt like I SHOULD stop running due to the weather. I wasn't all that tired, and felt like I had another lap or two in me, but decided not to push it, especially since I'd lose the ability to track the run, catch Pokemon, and listen to music once the phone died. 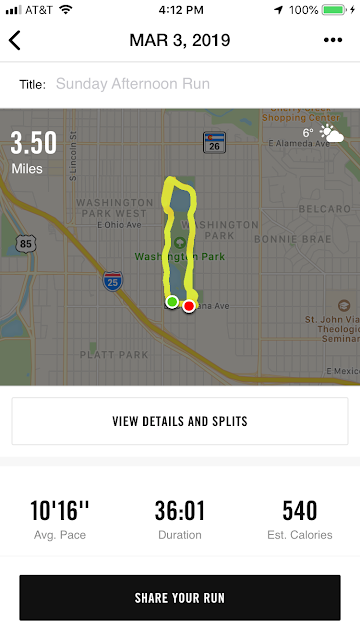 Posted by Craig Dodge at 3:20 PM No comments: