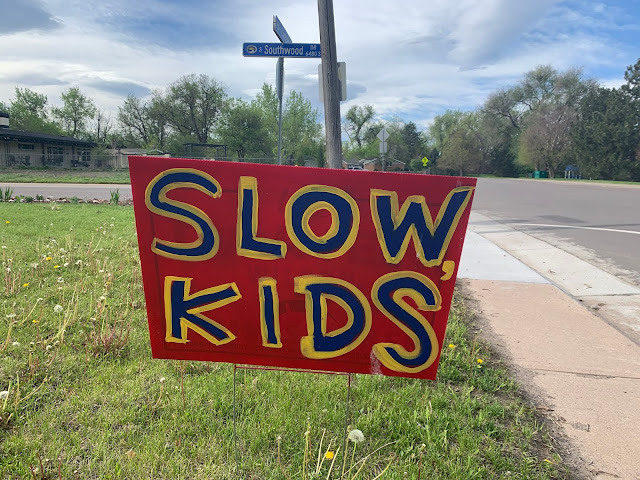 May 21, 2021
7.45 Miles in 1:18:44
Mood: Slow kids, fast woman.
Soundtrack: Lord Huron "Long Lost"
This sign would be much funnier if they forgot to include that little yellow comma.
I ran the Highline Canal to Ketring Park and back, and the most memorable thing happened when I stopped to look at my phone. I looked up from my phone to see a woman run by. I would guess she was in her early twenties, and she may have been the fastest runner I have ever seen in person. I was standing, but had I been running, she would have passed me almost as quickly. She was like half human, half cheetah. It was impressive.

Posted by Craig Dodge at 8:13 AM No comments: 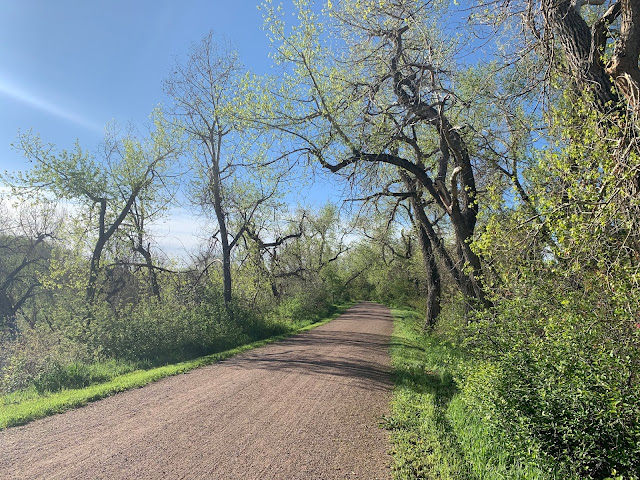 May 19. 2021
7.60 Miles in 1:19:05
Mood: Huzzzah for spring and the color green.
Soundtrack: Dispatch "America, Location 12"
We have entered the greenest portion of the year in Colorado, and I'm here for it. Thanks to a decent number of recent rainstorms, and temperatures rising as we approach the summer months, the highline canal trail is being transformed into a lush green environment which is a lot of fun to run through, much better than the barren landscape (which is still pretty in it's own way) of the past several months. The fact that I can now run in shorts is also a plus. Basically what I'm saying is that winter is terrible and thank God it is over and we can enjoy the best months of the year!

Posted by Craig Dodge at 7:53 AM No comments: 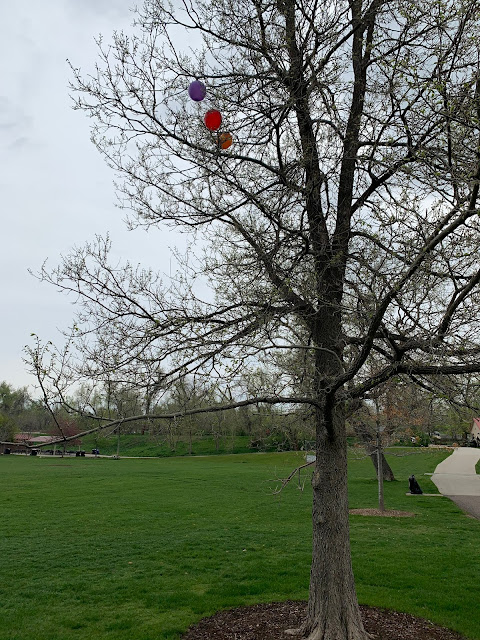 May 17, 2021
7.09 Miles in 1:17:10
Mood: Turning a crappy morning into an okay morning through sheer force of will.
Soundtrack: The Killers "Imploding the Mirage"
The skies were completely gray, I had an splitting headache, I had slept poorly, and still I managed to pull myself out of bed. The first three miles did not go so great, but I just kept plugging along slowly. My head was killing me, but I had taken some ibuprofen just before starting, and usually running makes my head feel better in those situations. At about the three mile mark, just as I was about to quit, it finally started feeling a little better. By the time I was in the final few miles, I felt pretty decent and just the fact that I managed to drag my butt around for seven miles when I was NOT feeling it made me proud of my effort...even if it was really slow and draggy. Sometimes, you just gotta put the work in, even when you aren't feeling it.
Also, I really like it when balloons end up in places they clearly were not intended to be, hence this photo for the blog today.

Posted by Craig Dodge at 7:48 AM No comments: 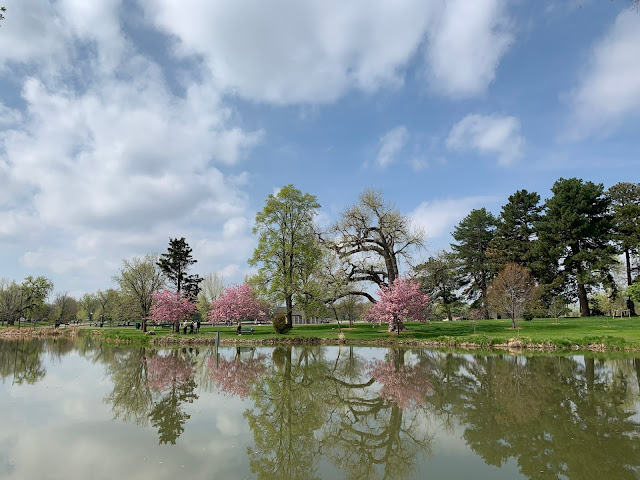 May 15, 2021
9.44 Miles in 1:32:48
Mood: Just a glorious morning in Colorado
Soundtrack: The Head and The Heart "Signs of Light"
I have long maintained that September is the best month of the year, but May is definitely rising in the power rankings. On what was basically a perfect spring Saturday morning at Wash Park, I was feeling incredible and ended up deciding to do four laps around the park because I was feeling good and I had the time, and it was just a perfect morning. Plus, I knew that with a vacation upcoming, I'd need to stockpile the miles while I was home so I wouldn't have TOO many miles that I'd need to hit 100 while in Hawaii. Oh, and there were pink trees shimmering across the fishing pond! How great is that?!?

Posted by Craig Dodge at 7:34 AM No comments: 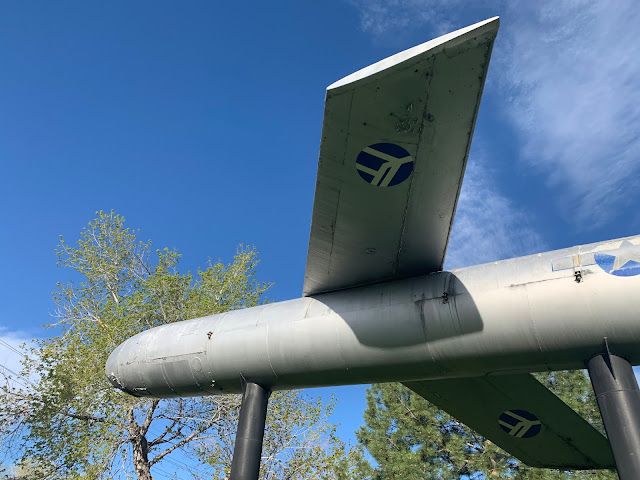 May 13, 2021
8.02 Miles in 1:23:23
Mood: Feeling great and running far.
Soundtrack: Distpatch "America, Location 12"
I decided to start running to the North and West, and I ended up in Belleview Park much quicker than I expected. Then I realized that I had to go back, and I was glad that I left a little earlier than normal, because I was a ways from home. I was distracted by the absolute perfection of a May day that could not have been more beautiful as well as this park decor which from a distance looks a little like a military jet, but as you get closer to it, looks much less like one. It's still very large and a pretty cool thing to put in a park. I read the plaque and learned that it has been standing guard over Belleview Park since 1997. I like it!

Posted by Craig Dodge at 8:15 PM No comments: 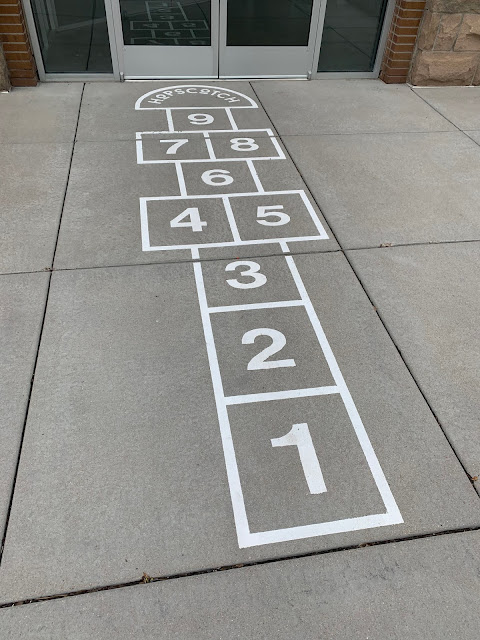 May 10, 2021
8.04 Miles in 1:28:13
Mood: Southglenn circles for the win.
Soundtrack: Locked On: Nuggets and The Bill Simmons Podcast
I wonder if anyone actually does Hopskotch into this bar? It's all set up for it, but it seems like a weird move. I can't remember if I've posted this bar entrance before or not, but it takes some creativity to keep finding pictures when I circle Southglenn. I basically kept running in circles and listening to people talk about my Denver Nuggets. It was a nice morning, although kinda cool and soon to be rainy. (It deluged all day once I finished up.)

Posted by Craig Dodge at 8:09 PM No comments: 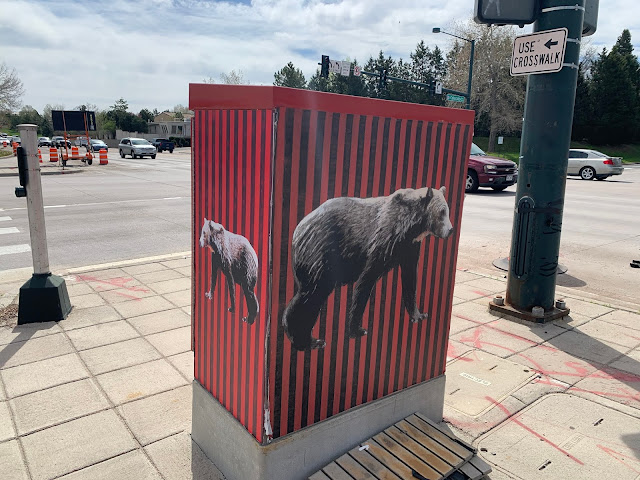 May 8, 2021
7.66 Miles in 1:20:00
Mood: Electric boxes now mandate where I run, I guess.
Soundtrack: Lord Huron "Strange Trails"
This fifty animals electric box thing is changing where I run. I ended up running on some of the least scenic portions of the Highline Canal Trail on this Saturday morning run so that I could get this pic of the Montana Grizzly. It isn't the prettiest section (The portion between Magna Carta Park and Bible Park) but it was fun to get out on some trails I hardly ever hit and see some new things. Plus, Grizzlies are pretty much my favorite animal, so I had to get this one!

Posted by Craig Dodge at 8:04 PM No comments: 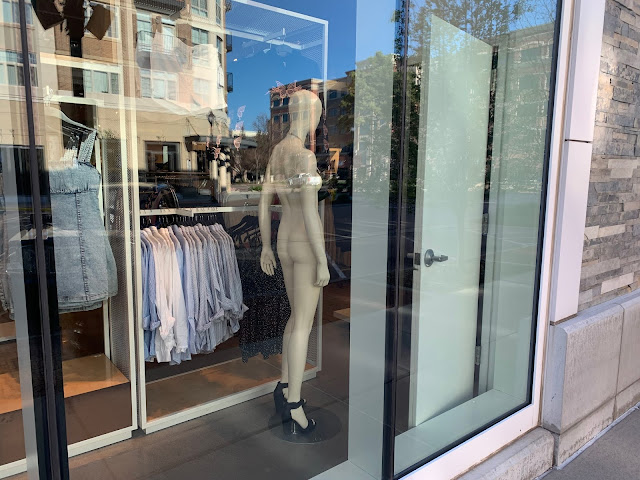 May 6, 2021
7.79 Miles in 1:26:27
Mood: What is happening at H & M?!?!
Soundtrack: TBTL
Someone left a nude mannequin wearing heels in a public facing window overnight at H & M, and it amused me to no end, as I can't imagine H & M corporate would be okay with this. Everytime I ran past this window I chuckled to myself. It was a no brainer that this would be the photo of this Southglenn run.

Posted by Craig Dodge at 7:52 PM No comments: 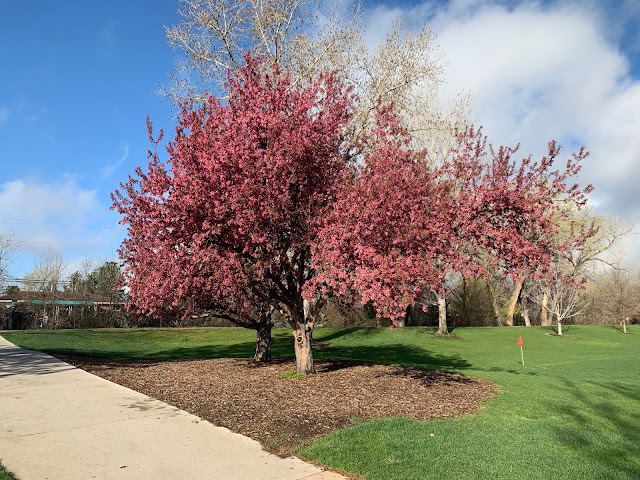 May 4, 2021
7.68 Miles in 1:24:13
Mood: Hooray for pink tree times!
Soundtrack: TBTL
The pink trees seem a few weeks behind schedule, but in the past few runs, I've been seeing them everywhere! April is usually peak season, but early May is not disappointing. This one is in full bloom at Miliken Park and it looked just lovely in the morning sun.

Posted by Craig Dodge at 3:11 PM No comments: 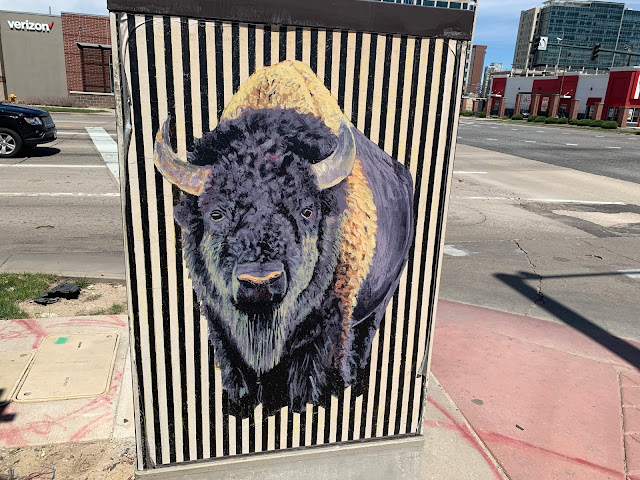 May 1, 2021
7.38 Miles in 1:17:46
Mood: Holy hot weather, Batman!
Soundtrack: Florence and the Machine "Ceremonials"
May hit, and with it came a mild heat wave. I started at Wash Park, but took a significant detour from my normal Wash Park run to head down to the intersection of Colorado Blvd and Evans so that I could get a picture of the Wyoming Buffalo electric box. My second capture of the 19 electric boxes in the Fifty State Animals series. (No idea why they only did 19, but I'll take what I can get.)
It was a really beautiful day, but I went somewhat during the peak of the warm temperatures, and by the final mile or two, I was really feeling overheated and warm. It's the first run in a long time that I did wearing short sleeves and shorts, and thank God for that, as if I had run in a long sleeve shirt and pants, I may have passed out from heat exhaustion. As it was, I had to stop at my car with a mile or so to go so that I could drink some water that I had brought with me so that I could power through to the end. I was extremely happy when I finally reached my mileage for the day and quit. Good run, but it wore me out.

Posted by Craig Dodge at 3:07 PM No comments: