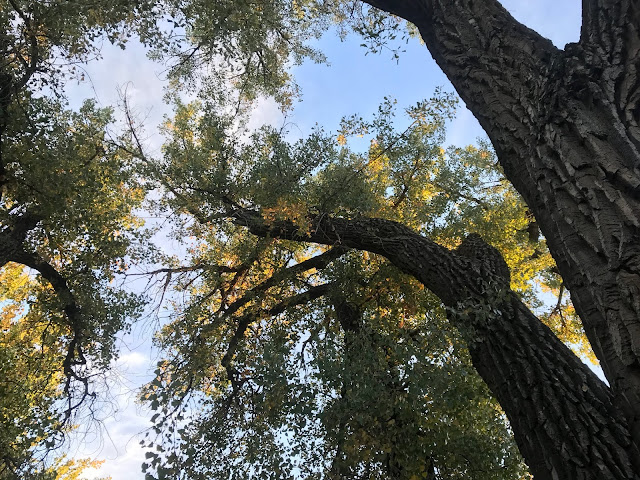 On the day which my brother turned 40, I went out and enjoyed a glorious morning in Colorado. I was somewhat hoping to push myself, and although the pace of my run would suggest that I did not go hard, I felt pretty good about the seven miles I put in. It felt pretty solid and I felt good about all the miles I put in among yellowing trees. 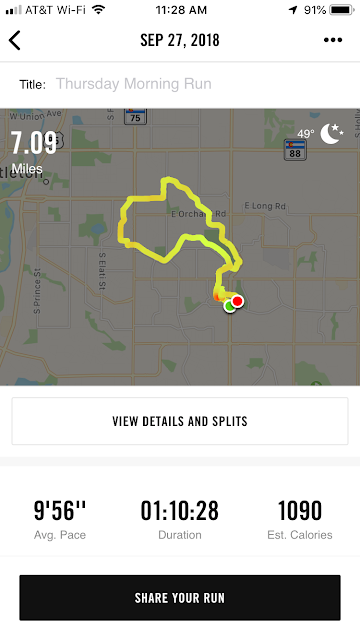 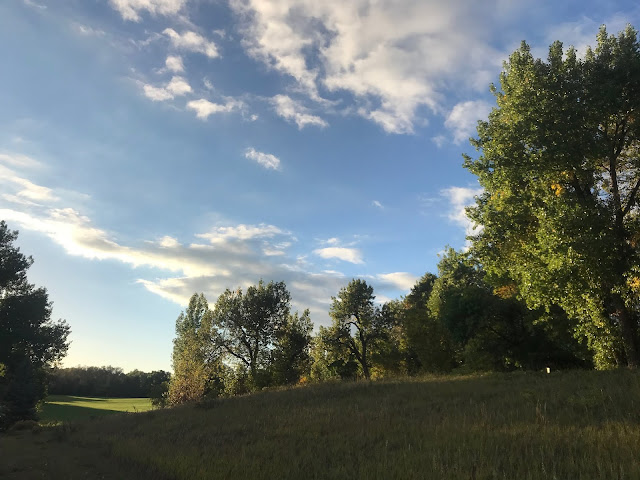 It was the first run of fall, and the weather acted like it. For the first time since spring, I was forced into jogging pants rather than shorts as I headed out because it was pretty dang chilly outside this morning. It actually felt pretty good to have a bit of chill in the air, and I had one of the better runs I've experienced in quite awhile. I complain about cold now, but I'll be dying for the weather to be this warm in three months. 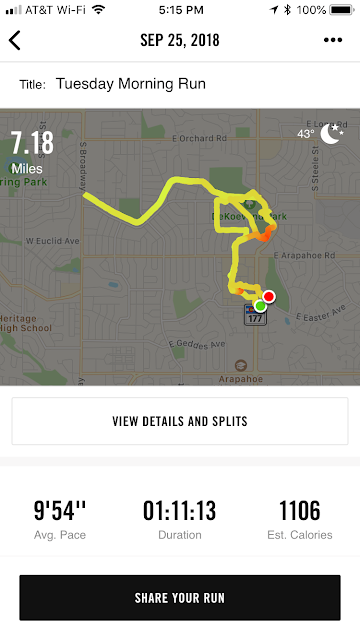 Posted by Craig Dodge at 4:32 PM No comments: 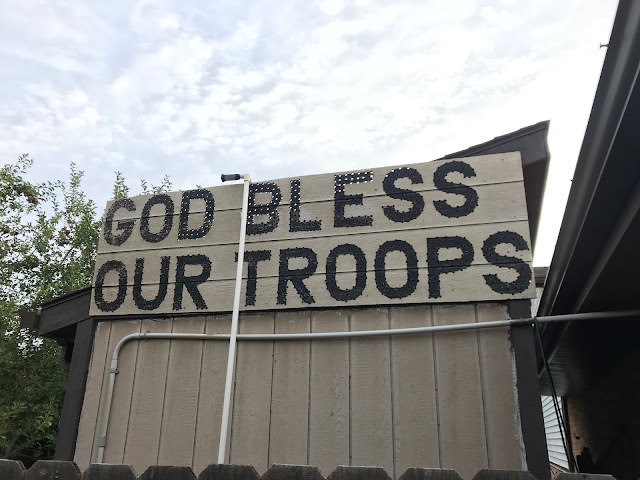 For the second time in three runs, I was torpedoed by a low blood sugar. I was legitimately annoyed and angry when I was done this morning, because I had started out so well, and then had to basically give up and walk home. That big long straight line on the map is the point to point where I stopped running and the app stopped tracking my progress up until I ran the final quarter mile just to get myself over 4 miles.

This time I recognized it as a low blood sugar, but my emergency almond butter wasn't enough to stop the problem completely, and neither was a fruit and yogurt parfait that I picked up at McDonalds on my walk home.

At least it was a pretty morning, with a light cool rain that felt amazing. Also, being forced to walk home meant that I walked along Arapahoe Road, a route I pretty much never run along, and I was able to get the photo above of a person's storage shed that definitely supports the military. I've been meaning to take a picture of this shed for literally years, but never really had an opportunity until today. So I take my positives where I can get them. 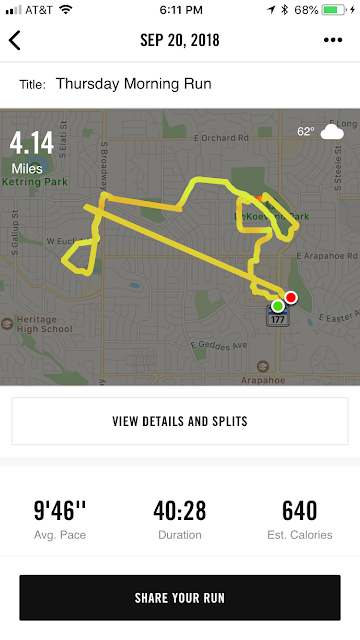 Posted by Craig Dodge at 5:19 PM No comments: 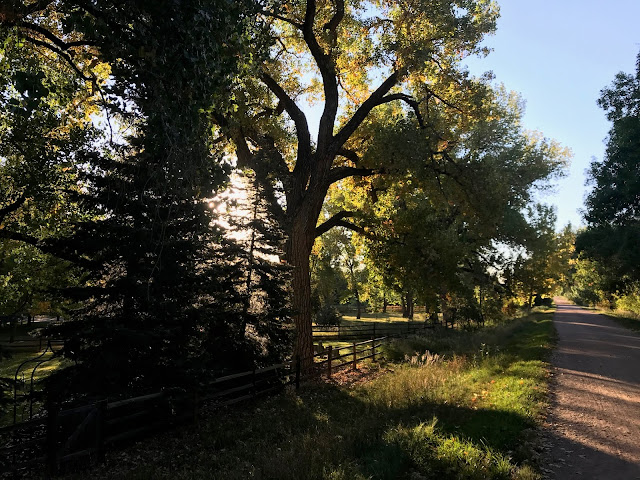 Today must have been bring your dog to the park day, and I missed the memo. I saw many more dogs than normal this morning, and even petted a couple of these very good boys. One that I petted was this large golden retriever, and he was SO SOFT AND FUZZY! I love dogs, so this was a good morning. I'm a little bummed that I didn't snap a picture of one of these dogs, it would have made a much better photo for this post than yet another gorgeous tree morning. Oh well.

The trees are noticeably beginning to turn yellow, and we are entering one of the more beautiful times of year to go on runs. I look forward to that few weeks of awesome beauty, but then I get a little sad, because it means that soon the trees will all be barren and cold weather makes it's return to our part of the world. Oh well, I'll enjoy what I have now, and try not to think about what is coming next...because right now is pretty great. 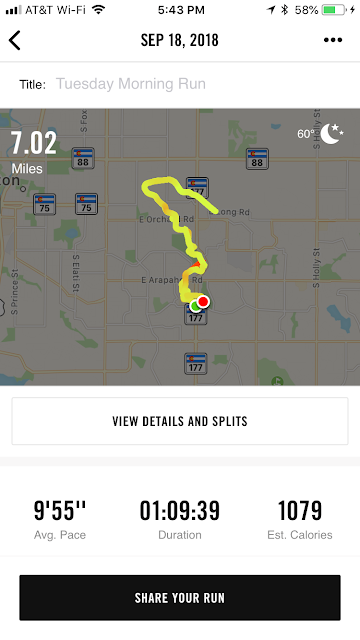 Posted by Craig Dodge at 4:53 PM No comments: 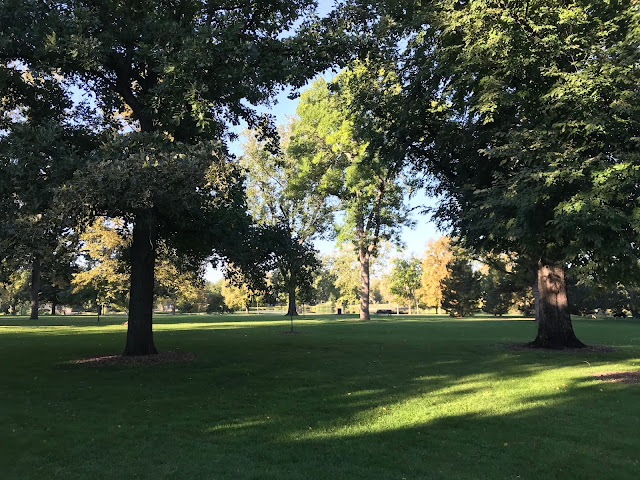 Wash Park is usually my happy place, but it was less so on Sunday morning. I don't mean to sound overly dramatic, but I may have had a tiny bit of a major melt down on this run. I have never been so discouraged by a run. My time was actually deceivingly fast per mile, but I couldn't sustain any long runs and I felt zapped. I was getting more discouraged than I have felt in years. It was having a mini-existential crisis for a bit. It was legitimately depressing for awhile.

Then I got home, and realized that my blood sugar was low, and likely had been for awhile, which almost certainly led to this severe ennui. Having a low blood sugar is much like when Harry Potter sees a dementor, it saps your strength and all your positive thoughts and leaves you feeling week and powerless. Oddly, in both seeing a dementor and having a low blood sugar, the cure to that awful feeling is eating chocolate. 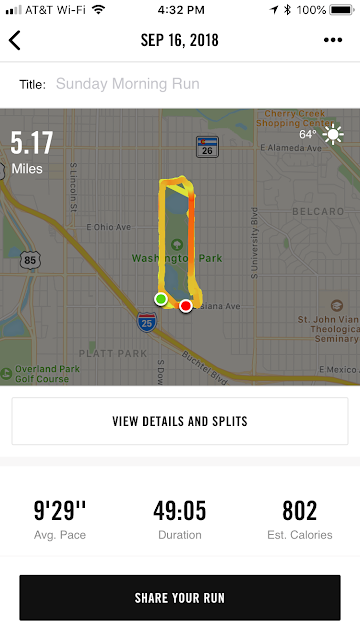 Posted by Craig Dodge at 3:41 PM No comments: 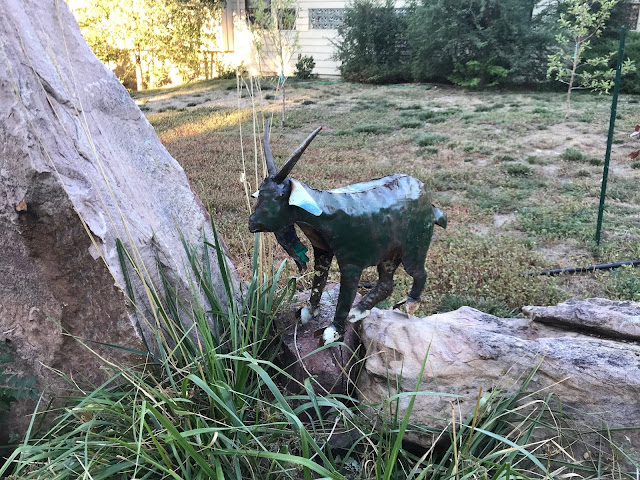 I've run by this particular house in this photo hundreds of times. So either they just got this billy goat statue, or I am unspeakably unobservant. I'm pretty sure it's a new item, but the unobservant option is definitely on the table. Either way, I like the goat. 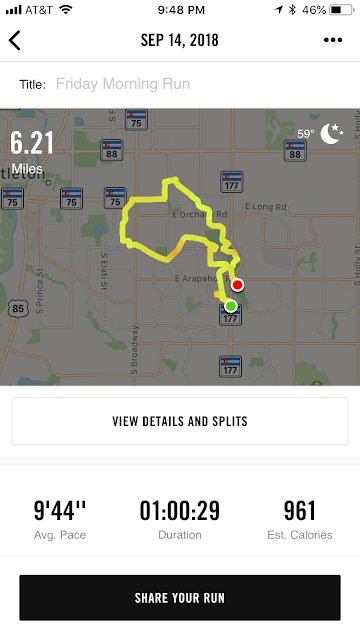 Posted by Craig Dodge at 3:30 PM No comments: 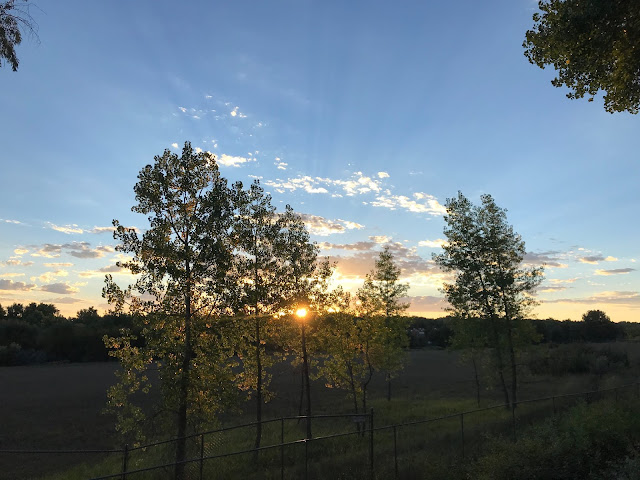 This morning was impossibly pretty. Like, I had to keep stopping every five minutes to take new pictures of beautiful things because of just how pretty it was. It was a good morning to be reminded that life is pretty good and worth living, and it's a really good thing to get up early in the morning and see it all. September is good for that kind of life affirming stuff. 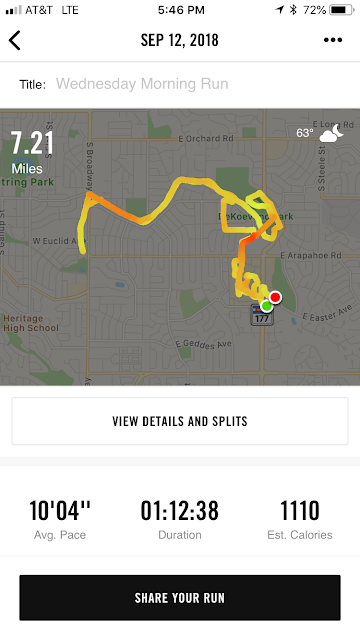 Posted by Craig Dodge at 4:49 PM No comments: 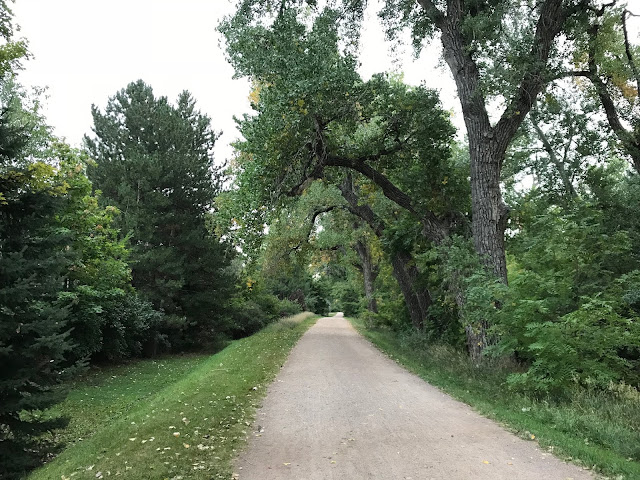 This was actually a really fast run (by my standards), but my numbers look terrible because I took a five minute phone call from my wife and didn't pause my run as I walked slowly while talking. My average pace went from 9:25 minute miles to a 10:00 mile pace thanks to that lack of pausing the app. Oh well, the exercise was still just as effective, which I guess is more the point anyway.

The quick pace was due to a significant motivating factor...my brother. He is in town this weekend, and I tried to get my run in quicker than usual so that I could get to work a little early, so that I could get off earlier to see him. That motivation may be meaningless, as I will likely not see him until late this evening at this point, but it did inspire a rather quick run this morning.

Also, the cool September weather was almost chilly today, with temps hanging out in the 50's the whole time I ran. It is a glorious temperature, but also a reminder that cold days lie ahead in the not too distant future. I also was a little sleepy this morning, as I stayed up to watch the Eagles vs the Falcons in the NFL Opening Night game which was actually kind of an ugly game, but I'm happy football is back even if the first game was a bit of a dud. 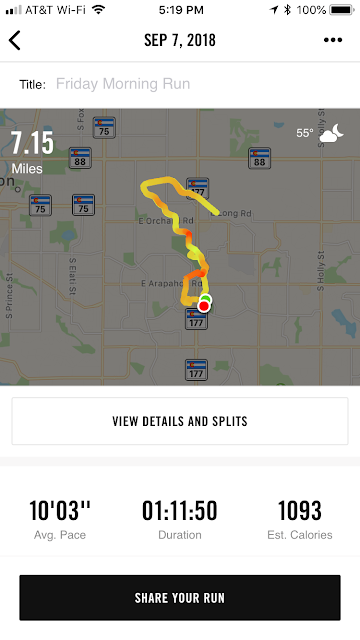 Posted by Craig Dodge at 4:27 PM No comments: 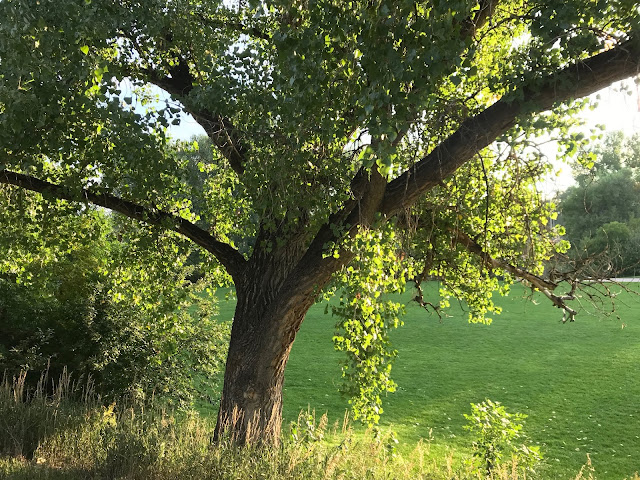 This blog is quickly turning into my latest photo of a tree log, but so be it. I like trees. Especially when they are lit up by early morning sun and look sweet. This run was odd in that I felt pretty decent during it, but also was kind of slow and tired. My alarm went off way too early while I was in the middle of a very solid bit of REM sleep, and I had a hard time waking up. I was proud of myself that I got out of bed and made my way towards the Highline Canal, as I was tired, and my bed was warm, but somehow I convinced myself I must, so I did. 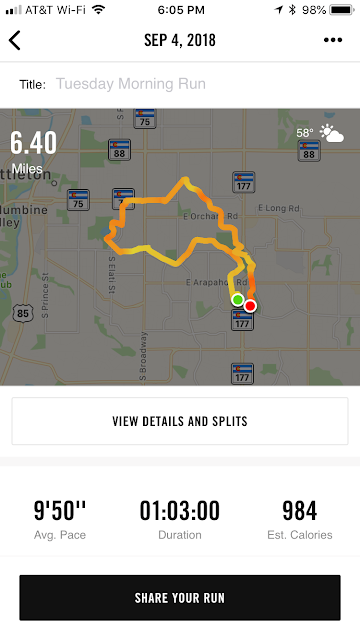 Posted by Craig Dodge at 2:59 PM No comments: 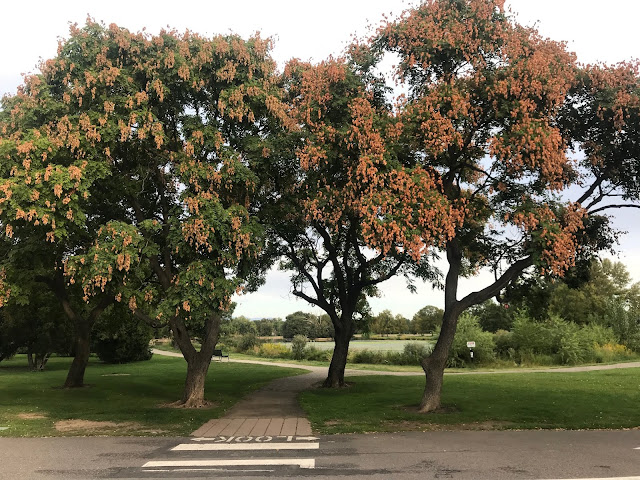 I'd just like to say that September is the best. The absolute best. This was the final non-football Sunday of 2018, and I was in a glorious mood as we had vintage perfect September weather and thanks to some of Jen's co-workers attending a free Everclear concert, I was inspired to listen to "So Much For The Afterglow" for the first time in years and years. I listened to that album relentlessly in the late 90's, and I still have it pretty well memorized. Hearing it again during the very beginning of my favorite month in my favorite park was a pretty grand way to spend a morning, and it led to me actually having a very quick paced run. All good things! 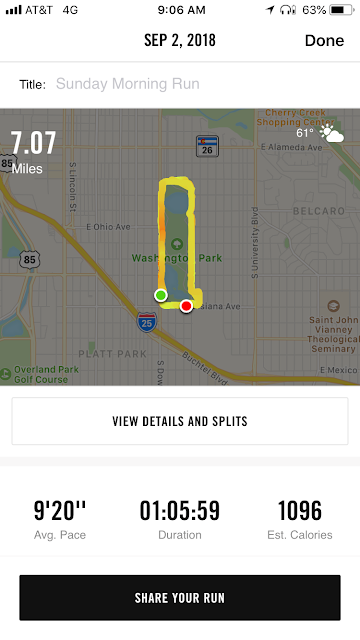 Posted by Craig Dodge at 2:56 PM No comments: