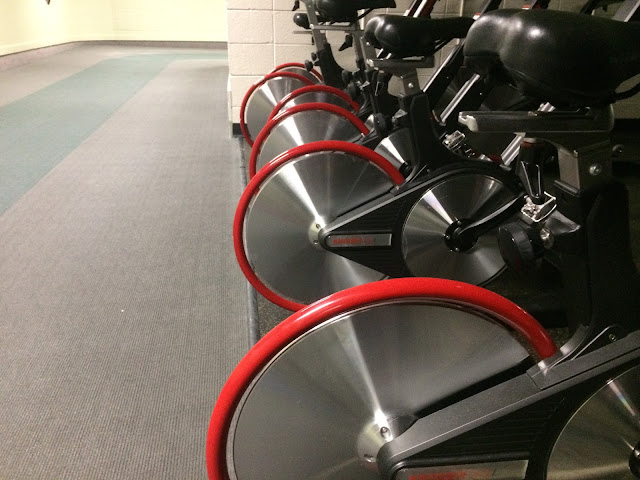 If my Nike+ Running app is to believed it was 0 degrees outside when I began running. This is why the photo you see is from the Goodson Rec Center track. With a ton of snow on the ground and icy temps, I had no interest in running outside this morning. Too darn cold. So instead, I ponied up $5.25 to run in tenth of a mile circles. Track running remains not that much fun, but sometimes you gotta do what you gotta do. I listened to the Mediocre Show and tried to make the best of it. At least I was able to use the steam room afterwords, which almost makes running on the track worthwhile. It's so relaxing to spend 10 minutes in the steam room.

Today's photo is of the stationary bikes sitting in one of the rooms adjacent to the track. I liked the way the red wheels looked all lined up, and then I got thinking...why do they need to put fake wheels on a stationary bike? Wheels of any sort seem completely unnecessary.

The funniest moment of the morning happened as I paused to walk on the track while I tried to select what music I was going to listen to as I finished up my run. As I was looking at my phone, an older and very slow runner bumped into me. He was hugging the outside wall all morning, and that is where I was walking...he had the entire track at is disposal, but rather than go around me, he smacked into my back. He didn't do it violently, but it did seem like he was sending a message, "This is my turf, kid." He was super slow, and for the rest of the morning, I took particular pleasure in quickly passing him every time I did. 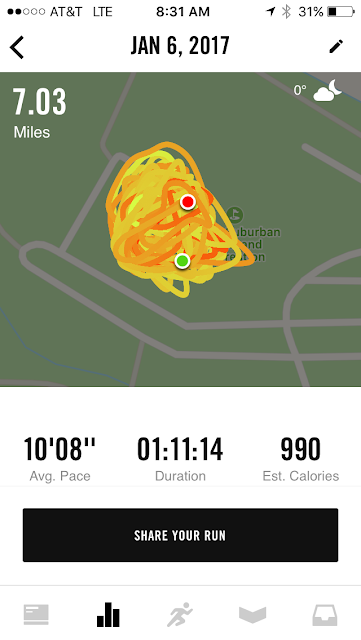