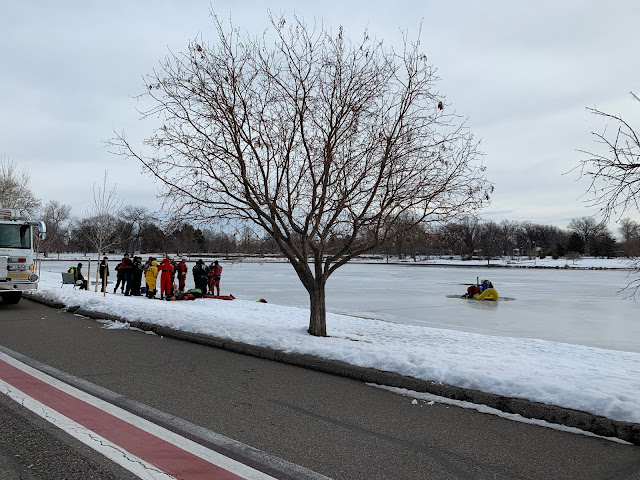 Last Sunday I ran pretty much the same track I hit up this Sunday, and it was much less enjoyable. This time, there had been enough snow melting to make the entire street pretty much non-icy all the way around Wash Park, and that small change was enough to ratchet my enjoyment way up. Life is more fun when you are not worried about slipping. I even did a very rare fourth loop of the park to get in more miles as I am trying to pack them in to get to 100 during the short month of February in which I took a few days off at the beginning. I feel like I'm going to make it to 100, but it's gonna be close.

I also was able to check in on the Denver Fire Department practicing rescuing people who fall into frozen lakes. At least, that's what I think whey were doing. It's amazing how often this takes place during the winter on Sunday mornings. This is the third time this winter that I've seen these little training sessions taking place. I'm always amazed that people ever walk out on frozen lakes. Not a thing I am all that interested in attempting.